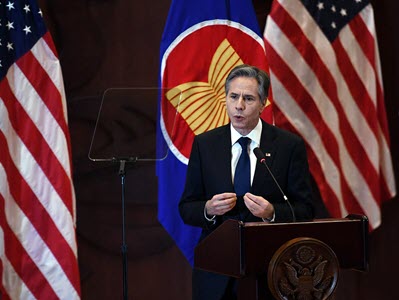 In this episode of NBR’s Asia Insight, NBR counselor Charles Boustany is joined by Wendy Cutler and Robert Holleyman to discuss the latest developments in Indo-Pacific trade, including the Biden administration’s proposed Indo-Pacific Economic Framework, challenges around market access and digital trade, and how to overcome political obstacles in the United States to allow for more effective trade policy to be implemented.

Charles Boustany is a Counselor at NBR. Boustany retired from the U.S. Congress after serving from 2005 to 2017. He was an acknowledged leader in the areas of trade policy, international tax policy, energy policy, and foreign policy in the U.S. House of Representatives. He co-chaired the U.S.-China Working Group, the U.S.-Japan Caucus, and the Friends of TPP Caucus.

Wendy Cutler is Vice President at the Asia Society Policy Institute (ASPI) and the managing director of their Washington, D.C. office. In these roles, she focuses on building ASPI’s presence in the nation’s capital and on leading initiatives that address challenges related to trade, investment, and innovation, as well as women’s empowerment in Asia. She joined ASPI following an illustrious career of nearly three decades as a diplomat and negotiator in the Office of the U.S. Trade Representative, where she also served as Acting Deputy U.S. Trade Representative.

Robert Holleyman is a Partner at the law firm of Crowell & Moring and the President and CEO of Crowell & Moring International. Ambassador Holleyman served as Deputy U.S. Trade Representative from 2014 to 2017, where he was responsible for U.S. trade negotiations with Asia and led global trade policy on data governance, digital trade, and intellectual property. He was CEO of BSA – The Software Alliance from 1990 to 2013 and served as senior counsel in the U.S. Senate earlier in his career.

[2:10] Where is the United States heading with trade, and how is the lack of a clear trade policy toward the region impacting U.S. influence in the Indo-Pacific? Is our lack of a strong presence providing an open lane for China to set rules and norms in the region?

[6:30] Are you concerned about the durability of the Indo-Pacific Economic Framework (IPEF) since it’s not a full trade agreement? And how are we going to succeed in negotiations if market access isn’t included?

[12:58] If IPEF is promoted as an anti-China initiative, does that hurt our chances of getting ASEAN countries on board? And will this be enough to compete with other regional agreements, or is it too little too late?

[14:41] What are some of the main challenges around digital trade? And could a modular approach be an effective way to dealing with some of these issues?

[21:15] Will USTR and Commerce be able to work together effectively on IPEF, or should there be someone in charge of coordinating this?

[24:15] Can IPEF serve as an opening to a more standard trade agreement in the future?

[27:07] Trade has been used as a scapegoat for a lot of issues, and is often viewed negatively these days, how can we change that narrative?

This podcast was edited by Doug Strub at NBR.