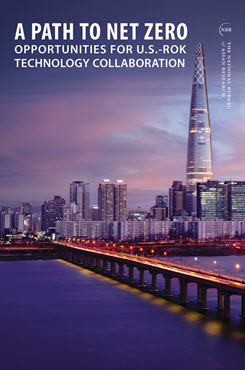 Essay from NBR Special Report no. 101

This essay examines the potential for hydrogen-based energy technologies and considers opportunities for international cooperation to establish a hydrogen economy, particularly through bilateral collaboration between the Republic of Korea (ROK) and the United States.

In recent years, major economies have announced hydrogen roadmaps to shift the energy paradigm toward hydrogen to reach their targets of carbon neutrality. However, individual countries’ efforts alone are insufficient to realize a hydrogen economy; multilateral and bilateral cooperation are needed as well. The U.S. has taken a balanced approach between the production of blue and green hydrogen and the consumption of hydrogen for mobility and power generation. This approach contrasts with that of the ROK, which has emphasized the private sector’s involvement in developing the hydrogen economy, with a focus on fuel-cell technology for power generation and mobility. Interviews with South Korean experts identified four potential areas of cooperation with the U.S.: (1) production, storage, and delivery (the supply side of the hydrogen economy), (2) power generation, mobility, and fuel-cell use (the demand side), (3) hydrogen production based on nuclear small modular reactors, and (4) standardization and certification.

Kyungjin Boo is a Research Professor in the International Energy Policy Program at Seoul National University. He has worked at the Korea Energy Economic Institute for over 30 years to develop national energy plans.