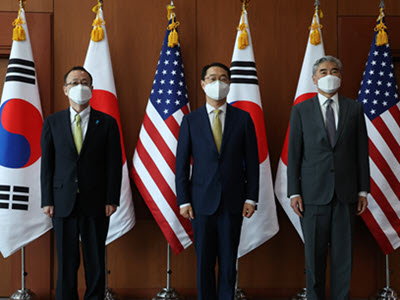 This commentary by Clint Work is part of the roundtable “The Future of Trilateralism under the Biden-Yoon-Kishida Administrations.”

Although trilateral cooperation between the United States, Japan, and the Republic of Korea (ROK) is often focused on North Korea’s nuclear and missile capabilities, the Biden administration’s Indo-Pacific Strategy emphasizes the need to bolster trilateralism on a broader regional level. For Seoul, however, improving the ROK-Japan side of the triangle and trilateralism in general is fraught with historical baggage, contentious domestic politics, and long-standing concerns about entrapment in a growing U.S.-China rivalry.

Nonetheless, several aspects of efforts to transform the U.S.-ROK bilateral alliance could catalyze and even require improved ties between the ROK and Japan specifically and trilateral relations in general. These include the transition of wartime operational control (OPCON) from the United States to South Korea, Seoul’s relationship with the United Nations Command (UNC) and UNC Sending States, and expansion of the scale and scope of U.S.-ROK military exercises beyond the Korean Peninsula.

To successfully complete wartime OPCON transition, Seoul should expand its strategic aperture and planning and operational capabilities beyond the Korean Peninsula. This includes tighter and upgraded communication not only with Washington—regarding the onward flow of U.S. and multinational forces and strategic assets to the region—but also with Tokyo insofar as both U.S. and UNC-Rear headquarters bases in Japan play a critical role in such operations. Although ROK-Japan military cooperation would likely be required in the longer term, in the short term more high-level policy consultations and information sharing between Seoul and Tokyo are needed. To minimize political complications, public diplomacy should frame the effort as a larger process bolstering ROK agency within the alliance and region and enhancing joint training and readiness for other contingencies beyond North Korea, such as humanitarian assistance and disaster relief.

Related to the process of wartime OPCON transition is Seoul’s relationship to the UNC and UNC Sending States. As a result of OPCON transition, Seoul would need to refine and upgrade its relationship to the U.S.-led UNC. In addition to enforcing the terms of the Korean Armistice Agreement, the UNC is in charge of coordinating any contributions from sending states deployed in the defense of South Korea and could be partly responsible for their combat operations. In recent years, various sending states, such as Australia, Canada, France, and the United Kingdom, have increased their personnel and level of engagement with both the UNC headquarters in the ROK and the UNC-Rear headquarters in Japan.

While UNC revitalization has been viewed skeptically in Seoul as yet another example of the United States and other external powers infringing on Korean sovereignty and interests, ROK leaders should be encouraged to lean into the process by bolstering cooperation with UNC Sending States and through them Japan. Again, the process can be framed as Seoul exerting greater agency and ownership of the process so as to allow ROK leaders to nest cooperation with Japan within a multilateral and less politically fraught context. Seoul is already committed to deepening security and economic cooperation with these key UNC Sending States both on bilateral terms and in other multilateral forums. Doing so through the UNC is a natural extension of that effort.

Finally, expanding the scale and scope of U.S.-ROK military exercises—a key commitment in Presidents Joe Biden and Yoon Suk-yeol’s joint statement on May 21—is another bilateral measure that could bolster trilateralism beyond the Korean Peninsula. Indeed, it is already afoot. The ROK, the United States, and Japan will once again hold the Pacific Dragon multilateral ballistic missile defense exercise amid the ongoing U.S.-led biennial Rim of the Pacific (RIMPAC) exercises. Moreover, Australia and possibly Canada will also participate. The Pacific Dragon exercise is aimed at improving allied interoperability and coordination in detecting and tracking ballistic missile launches. For Seoul, it reinforces engagement with key UNC Sending States beyond the Korean Peninsula and provides helpful cover for military cooperation that might otherwise be more politically contentious if attempted in a purely trilateral or bilateral ROK-Japan setting.

The U.S. Congress has a key role to play in these efforts. For starters, it should hold hearings on the issue of alliance transformation. A key takeaway from such hearings should be that OPCON transition will build U.S.-ROK interoperability while enabling Seoul to take on not only a greater role in the alliance but also greater regional responsibilities.

Congress should also convene regular trilateral consultations with ROK and Japanese lawmakers. Participants could visit key U.S. and allied military bases in both the ROK and Japan and receive briefings from U.S., ROK, and Japanese defense officials as well as diplomatic and military personnel from UNC Sending States. Such meetings would reinforce logistical and operational links between Japan and ROK security, demonstrate the complementary contributions each country makes to stability on the Korean Peninsula and in the region, and provide multilateral backing to the overall effort.

To be clear, for U.S.-Japan-ROK trilateralism to advance, Seoul and Tokyo must find a way to navigate and overcome their historical and contemporary disputes. Recent diplomatic meetings indicate that new efforts are at least underway. In the meantime, the aspects of bilateral U.S.-ROK alliance transformation highlighted above offer meaningful avenues to deepen both ROK-Japan and trilateral cooperation in a less politically contentious context and offer Seoul a pathway to increased agency. For the United States, such measures would help stitch together an evolving multilateral tapestry in the region at a time when Washington needs allies and partners to bear a larger burden in upholding a rules-based international order.

Clint Work is a Nonresident Fellow with the Stimson Center’s 38 North Program. He served as a fellow in the 38 North Program from 2020 to 2022, where he focused on issues related to U.S.-ROK alliance transformation, led congressional engagement about peace and security on the Korean Peninsula, and organized and moderated a military working group that discussed the challenges of North Korea’s advancing capabilities and provided recommendations for the United States and ROK to prepare against an evolving threat.