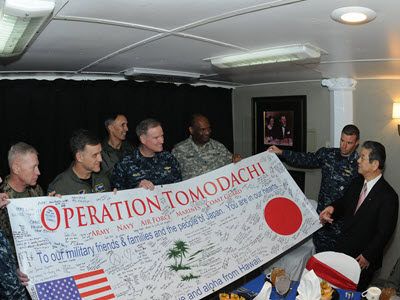 In the weeks following the earthquake and tsunami that struck Japan on March 11, 2011, the combined U.S.-Japan military relief effort—Operation Tomodachi—was chronicled on the NBR website. This project archive details the successful execution of Operation Tomodachi.

On the eve of the tenth anniversary of the triple disaster, recent Deputy Assistant Secretary of Defense for East Asia Heino Klinck commented on the significance of Operation Tomodachi for the U.S.-Japan alliance at a private event for NBR. Listen to those remarks here.

On March 11, 2011, at 14:46 Japan Standard Time, a 9.0 magnitude earthquake occurred 81 miles to the east of Sendai, Japan. Over the course of the crisis, the United States and Japanese governments engaged in far-reaching cooperation, providing relief and aid to the affected areas of northeast Japan.

The heart of the U.S-Japan alliance, since the establishment of the alliance in 1951 with the U.S.-Japan Mutual Security Treaty (MST), resides in the collaborative work undertaken by the U.S. military and the Japan Self Defense Forces (JSDF). Operation Tomodachi (トモダチ作戦) was the U.S. Armed Forces operation that supported Japan in disaster relief following the 2011 Tohoku earthquake and tsunami. Tomodachi is Japanese for “friend,” indicating the deep nature of the relationship.

The National Bureau of Asian Research (NBR) began tracking developments in Japan shortly after news of the earthquake and tsunami reached the United States. In the following weeks, Operation Tomodachi was chronicled on the NBR website. The resulting chronology, which details the successful execution of Operation Tomodachi, is archived below.

A CH-46E Sea Knight helicopter takes off from the USS Ronald Reagan.

A member of a FEMA Urban Search and Rescue Task Force searches structures and debris in Kamaishi, March 16, 2011.

U.S. Navy personnel check sprinklers during a radiation scrub on the flight deck of the USS Ronald Reagan.

U.S. Navy airman loads supplies into a helicopter aboard the USS Ronald Reagan.

U.S. Marine officer meets with Japanese refugees in a school being used as a shelter. 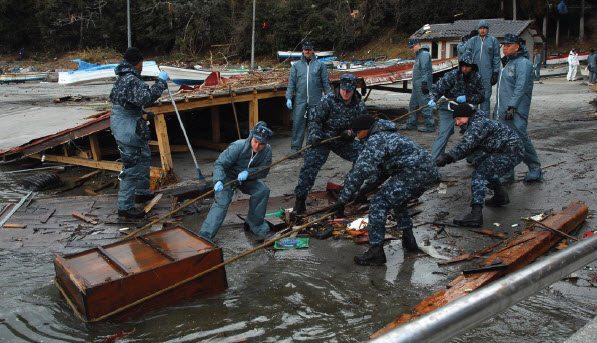 U.S. Navy sailors clear debris from a harbor in Oshima. 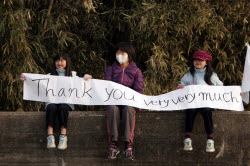 Two children and their mother thank Marines and Sailors of the 31st Marine Expeditionary Unit for cleaning up debris on Oshima Island. (Official Marine Corps photo)

Sailors from the USS Ronald Reagan and JS Hyuga wave to each other.