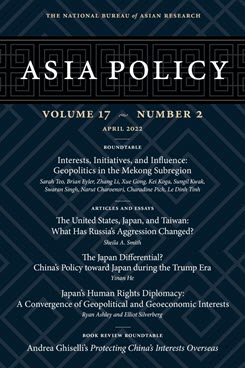 The United States, Japan, and Taiwan
What Has Russia’s Aggression Changed?

This essay considers Russia’s recent invasion of Ukraine and analyzes similarities, differences, and lessons from that conflict to date for a cross–Taiwan Strait scenario that involves the U.S. and Japan.

Note: This essay is the first in a series of four in 2022–23 on “A U.S.-Japan Partnership for a New Era,” made possible by the generous support of the U.S.-Japan Foundation, and is free to download.

Russia’s invasion of Ukraine has sent shockwaves around the globe and upended assumptions about the likelihood of great-power war, including in the Taiwan Strait. Differences abound between the two scenarios. Yet Russia’s war in Ukraine is already reshaping NATO’s future and influencing alliance thinking in the Indo-Pacific. With growing Chinese military activity putting pressure on Taiwan’s defenses, the U.S.-Japan alliance would be instrumental to U.S. strategy in a cross-strait crisis, and a cross-strait contingency would have widespread ramifications for the defense of Japan. The U.S. and Japan must not only develop a comprehensive strategy to deter aggression across the Taiwan Strait but also consider the risks each is willing to take should major-power conflict erupt. Even though Russia’s aggression against Ukraine does not offer a parallel case study, it raises new questions that must be addressed by the U.S. and Japan as they assess how to avoid the outbreak of war around Taiwan. There is already cause for the U.S. and Japan to revisit some of their assumptions about how to prepare for a cross-strait crisis. In particular, China’s use of force against Taiwan would not be a localized conflict; it would have systemic consequences. Understanding this and other risks is paramount to ensuring that such a crisis is deterred.

Sheila A. Smith is the John E. Merow Senior Fellow for Asia-Pacific Studies at the Council on Foreign Relations. An expert on Japanese politics and foreign policy, she is the author of Japan Rearmed: The Politics of Military Power (2019), Intimate Rivals: Japanese Domestic Politics and a Rising China (2015), and Japan’s New Politics and the U.S.-Japan Alliance (2014).