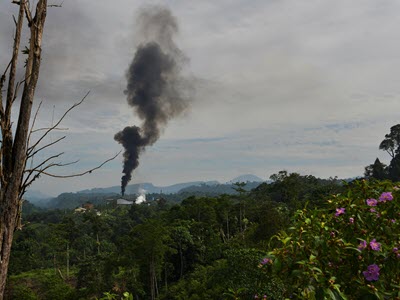 Margareth Sembiring (RSIS) considers the implications of the Covid-19 pandemic for climate action in Southeast Asia and argues that more ambitious measures are needed to meet the targets set in the Paris Agreement within a shortening time window. This essay marks the expansion of the New Normal in Asia series to include the voices of emerging scholars and analysts in both the United States and the Indo-Pacific.

The Covid-19 pandemic has potentially triggered a sweeping new normal across multiple facets of life. Travel and tourism may continue to see the enforcement of stricter health measures. More businesses may permanently shutter their physical establishments and migrate to virtual platforms instead. Big concerts and conferences may never look the same.

“Post-pandemic recovery plans in Southeast Asia have affirmed the supremacy of economic growth. The present difficulty in greening the economy…raises questions about the practicability of this goal.”

The pandemic, however, is unlikely to usher in a new normal for action on climate change in Southeast Asia. On the contrary, post-pandemic recovery plans in the region have thus far affirmed the priority of economic growth for regional countries and are set to reinforce existing inconsistencies in efforts to green the economy. This raises questions about the effectiveness of green growth ideals, which are perceived as the most potent solution to climate change. This essay considers the implications of the Covid-19 pandemic for climate action in Southeast Asia and argues that more ambitious measures are needed to meet the targets set in the Paris Agreement within a shortening time window.

ACTION ON CLIMATE CHANGE BEFORE COVID-19

Efforts to address climate change have started to gain traction in Southeast Asia in the last fifteen years. While the earlier phase saw an emphasis on adaptation, the climate mitigation agenda has become more prominent following the 2015 Paris Agreement, especially after countries submitted their emission reduction pledges in the Nationally Determined Contributions. In general, Southeast Asian countries seek to cut down emissions by expanding the share of renewable energy, increasing efficiency, adopting cleaner fuels, and improving public transportation systems. More specific measures include biofuel development in Indonesia, Malaysia, and the Philippines. In Singapore, conventional vehicles will be phased out by 2040 and incentives for purchasing electric vehicles will go into effect as early as 2021.

Although relevant policies are in place, the existing initiatives are insufficient to reach the targets in the Paris Agreement. The targets include keeping global warming below 2°C above pre-industrial levels, and even down to 1.5°C, by the end of this century. To reach the 1.5°C target, the world has roughly ten years until 2030 to slash emissions by 7.6% every year, according to a UN report. Climate Action Tracker rates Singapore’s and Indonesia’s pledges highly insufficient, whereas the Philippines’ pledge is rated 2°C compatible, although still inconsistent with the 1.5°C limit. One reason is that Southeast Asian countries’ targets for transitioning to renewable energy are still too low: Indonesia targets 23% of primary energy supply by 2025, Singapore 10% of peak electricity demand by 2030, Malaysia 20% of electricity generation by 2030, and Thailand 30% of energy consumption by 2036. The remaining energy sources in these countries are overwhelmingly fossil fuel–based. Thus, while some progress is being made, the pace of action in the region is still too slow, despite the increasingly deafening climate warnings.

The hope that the Covid-19 pandemic would act as a reset button for climate action has been dashed by recent statements from regional governments on their recovery plans. These plans are heavily focused on restoring economic growth, with no explicit mention of boosting climate action beyond what is already in the pipeline. The current inadequate commitment for achieving the 1.5°C target is likely to maintain the status quo at best, with a potential erosion of efforts being even more likely. This suggests that emissions from the region are set to rise again, and consequently will reverse the world’s emission dip of up to 7% this year, which was made possible by pandemic lockdowns and constrained economic activities.

A possible reason for the lack of emphasis on strengthening climate commitments in the recovery plans is that the health crisis has neither a direct relation to nor immediate implications for the climate. Instead, it teaches lessons on the volatility of a globalized economy, the importance of developing a strong domestic capacity for the health-related sector, and the critical importance of digitalization. Achieving economic sufficiency thus has become the main aspiration of recovery plans, especially in countries that can afford to increase their reliance on the domestic economy. Guided by lessons learned, governments have turned to existing development plans and identified priority sectors regardless of historical emission records.

The European and South Korean “green deals” show that an agenda to address climate change needs to have enough momentum within the existing development trajectory in order for a “new normal” for climate action to emerge after the Covid-19 pandemic. Since Southeast Asia has been much less committed to action on climate change, recovery plans not only have failed to push climate objectives forward; they also reinforce inconsistencies in ongoing efforts to green the economy.

For example, Indonesia has fallen back on existing biofuel programs and aims to accelerate B30 biodiesel production. Although biodiesel reduces fossil fuel use, its increased production potentially expands the area needed for palm oil plantations. Indonesia also plans to strengthen domestic food supply chains by creating food estates, which will partially convert an area formerly under the Peatland Development Project. These initiatives will likely exacerbate emissions from land use change.

Similarly, Malaysia has engaged its ongoing large-scale solar scheme by opening a tender for 1GW solar projects to stimulate investments for economic recovery. While this will contribute to transitioning to low-carbon energy, Malaysia’s concurrent handing out of incentives for car purchases potentially jeopardizes efforts to reduce emissions. Singapore likewise has tapped into its existing growth agenda and is set to capitalize on technology-based climate solution businesses to revitalize the economy. At the same time, however, Singapore has acted to preserve its key aviation sector through generous support packages and has made no mention of placing environmental conditions on business resumption.

At this juncture, it is evident that although plans to recover from the pandemic might lead to some progress on climate action, such as reducing fuel use and continuing the transition to low-carbon energy, they can hardly be called a green recovery.

Post-pandemic recovery plans in Southeast Asia have affirmed the supremacy of economic growth. The present difficulty in greening the economy, which not even a super crisis on the scale of the Covid-19 pandemic can force leaders to expedite, raises questions about the practicability of this goal, especially in light of the shortening time window to achieve the Paris targets.

More critically, green growth principles are fundamentally incoherent on two grounds. The first is the conflicting realities between the circular economy mandate and low-carbon transition. While the former intends to cut down materials used in production cycles, the latter is highly material-intensive.

The circular economy, which began to gain popularity in 2010, is a response to unsustainable levels of resource consumption that have tripled in the last 50 years, according to a UN report. Since then, however, resource use has not yet declined. Quite the contrary, according to the United Nations, between 2010 and 2017 the global material footprint increased from 73.2 billion metric tons to 85.9 billion metric tons. With the circular economy still struggling to contain ever-expanding resource extraction, massive mineral demands from low-carbon technologies thus stand as a real paradox. According to the International Energy Agency, a wind plant needs eight times as many minerals as a gas plant of equal capacity, and an electric vehicle needs five times as many minerals as a conventional car.

A parallel problem is waste generation. While grappling with the plastic waste conundrum, the world is now witnessing mounting electronic waste. According to a UN report, electronic waste grew by almost 40% between 2010 and 2019, whereas the recycling rate increased by a mere 2% in the same period, which spells disaster for the natural environment. This is likely to be the same scenario for low-carbon products that have seen, for example, electric vehicles already rolling on the roads when the technologies to recycle lithium-ion batteries are still being figured out.

“Until technology can offer a solution to the vast land requirements for renewable energy, a total decarbonization of the power sector will remain an elusive goal…”

Second, the vision for 100% renewables is problematic considering the land area needed for the installation of renewable energy systems. Market forces will bolster investment in wind and solar power, but any progress will likely reach an impasse when brownfields, degraded lands, rooftops, and other convenient sites run out. In places where renewable facilities have been growing substantially in recent years, the competition for land to further market expansion is intensifying. Until technology can offer a solution to the vast land requirements for renewable energy, a total decarbonization of the power sector will remain an elusive goal, especially when energy demand continues to rise to keep up with economic growth.

Considering these fundamental limitations, the pursuit of green growth as the dominant strategy to address climate change needs urgent rethinking. Instead of losing more time trying to engineer compatibility between economic growth and the environment, which has proved to be very challenging, as evidenced in Southeast Asian recovery responses, it is time to pursue other options that can potentially accelerate emission reduction.

For example, starting in developed countries, a change in high-consumption lifestyles is imperative. A societal shift away from materialism and consumerism to the behavior of “enoughness” will not only quickly reduce material use and associated emissions but also allow governments to redefine the measure of societal progress away from a narrow focus on GDP growth to well-being. Defining societal progress in terms of well-being, which encompasses nonmaterial elements, including life satisfaction, relationships, physical and mental health, and the natural environment, will in turn encourage policymakers to introduce stronger measures such as placing limits on resource use and reducing work hours while also guaranteeing employment and limiting inequality.

Developing countries that still need to extract resources to expand their economies and achieve a socially acceptable quality of life can contribute meaningfully to action on climate change by urgently eschewing the current linear production-consumption model and adopting a circular economy mandate. To do so, consistent enforcement of environmental laws and the strengthening of the waste-management sector are critical.

An expansion of digitalization after the pandemic, which will happen not only in Southeast Asia but also elsewhere in the world, may help improve resource efficiency. But unless it is accompanied by an absolute reduction in resource consumption, the impact on climate and environmental causes will be limited. In countries that largely rely on imports for their low-carbon transition, an increased dependence on the domestic economy after the health crisis may discourage future large-scale renewable projects.

The Covid-19 pandemic has not altered the logic of economic growth that drives climate change. This is an invitation to reflect on whether prioritizing growth while trying to make it green is a viable way forward. With only ten years left to meet the Paris targets, reducing high-consumption lifestyles in developed countries, while more consistently enforcing environmental laws in developing countries, among other measures, may be necessary.