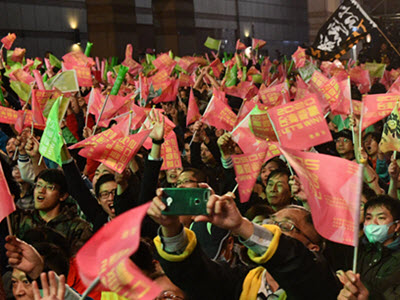 President Tsai Ing-wen was re-elected on January 11, 2020, with a record-breaking 57% of the vote. Following the 2018 midterm elections, it seemed unlikely that she would serve a second term. However, as China exerted more political and economic pressure on Taiwan, and as the protests in Hong Kong continued in 2019, her popularity rose in the polls. Tsai’s increase in popularity throughout the Hong Kong protests highlighted that, while Taiwan and Hong Kong are distinct political entities, they nonetheless have an impact on one another. Rachel Bernstein spoke with Christina Lai of Academia Sinica in Taipei about the implications of the 2020 election in Taiwan, the influence of the Hong Kong protests, and the future of cross-strait relations.

What are your observations about the outcome of the election. What factors led to Tsai Ing-wen winning, and how will the result of the Legislative Yuan elections affect her presidency?

Taiwan’s 2020 election marked a significant electoral turnout. The numbers of votes reached a record high since the 1990s, and statistics show that young voters in Taiwan (under 40) actively demonstrated their will to distance themselves from China. The Democratic Progressive Party (DPP) platform resonated with young adults and the Taiwan middle class, who showed their rejection of the “one country, two systems” model. Moreover, the DPP majority in the Legislative Yuan provides President Tsai greater ability to execute her China policy, continue her support for Hong Kong, and advance her policies.

China’s hard-line approach to Taiwan and the social unrest in Hong Kong are the two main factors that led to her landslide victory in the 2020 election. The Chinese government has historically attempted, with varying degrees of success, to influence Taiwan’s elections. The 2020 presidential election was no exception. Over time, Beijing has developed a more sophisticated strategy for shaping the preferences of the Taiwanese people, as exemplified through China’s support for Kuomintang (KMT) candidate Han Kuo-yu in the 2018 elections. In the last few years, China has sought to limit Taiwan’s international presence, restricting official channels of communication and conducting military exercises in the Taiwan Strait. But these coercive measures have not achieved their objective: fostering a strong and sustainable pro-China or China-friendly constituency.

What effect, if any, did the Hong Kong protests have on the recent presidential election?

As the pro-democracy protests in Hong Kong evolved into violent confrontations, President Tsai began to rise in the polls. The brutal use of the Hong Kong police force and China’s hard-line approach to cracking down on the protests have significantly raised political awareness among the younger generations in Taiwan. The eruption of the protests in Hong Kong also created a sense of urgency among voters, as concern grew that China’s authoritarian rule toward its own people and hard-line approach toward Hong Kong would ultimately jeopardize the autonomy of Taiwan. The harsher the oppression China deployed against the protestors in Hong Kong, the more support President Tsai gained.

Furthermore, the comparison of Hong Kong and Taiwan was and still is a popular theme in Taiwan’s political discourse because Beijing aims to execute a one-country, two-systems framework in Taiwan. Hong Kong’s political arrangement is intended to serve as a model for Taiwan’s future reunification with China. However, the appeal of this framework has disappeared as unrest and discontent in Hong Kong continue. Throughout the DPP campaign, the pro-independence candidates often invoked the slogan “Today Hong Kong, tomorrow Taiwan,” implying what would happen to Taiwan if it were to agree to the “one-China principle” or the one-country, two-systems arrangement.

Do you see any parallels between the identity struggles in Hong Kong vis-à-vis China and cross-strait relations?

Both Taiwan and Hong Kong have developed distinct political identities that are separate from the Chinese Communist Party (CCP). For instance, despite Beijing’s insistence on “patriotic education” in Hong Kong since 1997, young people increasingly identify as Hong Kongers rather than Chinese. The formation of a Hong Kong identity as distinct from a Chinese one reflects a setback in China’s policy and the limits of the country’s cultural attraction.

Taiwan’s distinct political identity originated under Japanese colonial rule and continued to grow throughout KMT martial rule. More importantly, Taiwan’s transition to, and subsequent consolidation of, democracy from the late 1990s to the 2000s also led to a formation of civic identity on the island that is paving the way for “Taiwan nationalism.” It appears that the more China has attempted to impose a Chinese identity (whether politically or culturally) on Taiwan and Hong Kong, the more the young people have developed distinctive local identities.

Have the Hong Kong protests been influenced by Taiwan’s democracy protests? What is the general relationship between the two activist communities?

Taiwan experienced a peaceful transition to a liberal democracy in the 1990s, and since then local NGOs and student activists have been essential parts of its political system. In this regard, Taiwan could serve as a useful model for activists in Hong Kong to raise public awareness and mobilize mass demonstrations.

The link between the Hong Kong and Taiwan activist communities is strengthening as the demonstrators in Hong Kong are calling for more democracy and less interference from China. In fact, Hong Kong and Taiwan links can be traced back to previous social movements that took place. Banners bearing slogans such as “Today Hong Kong, tomorrow Taiwan” and “Taiwan no Hongkongization” were frequently spotted in the student-led Sunflower Movement in Taiwan.

The social movements that occurred from 2014 to 2018 helped build a sense of community between the activist groups in Hong Kong and Taiwan and the convergence of their discourse and active engagement has profoundly changed the political landscapes in both places. For instance, in 2020 the Taiwan media featured the slogan “Hong Kong and Taiwan, we are together” in political discourse. At one of Tsai’s campaign rallies, there were even Hong Kongers in the crowd, shouting out “Liberate Hong Kong, revolution of our times” and waving a black flag. Many young Taiwanese also joined in the chant. Taiwan’s and Hong Kong’s media also reported that several Hong Kong student activists and legislators visited Taiwan to observe the 2020 election.

How would you characterize China’s strategy thus far to win over the hearts and minds of the Taiwanese people? Will the protests in Hong Kong have any impact on this strategy?

Over the last few decades, Beijing has applied both carrots and sticks in attempts to shape Taiwan’s behavior. However, these tactics have had limited success. For example, in 1995–96, China fired missiles into the Taiwan Strait ahead of the presidential election that ultimately led to President Lee Tung-hui’s win. Lee was viewed as pushing Taiwan toward legal independence, and his election ran counter to China’s expectations and desires. In 2014, the Cross-Strait Service Trade Agreement proposed by the KMT in the Legislative Yuan to strengthen bilateral trade led to the Sunflower Movement, which ultimately helped President Tsai, as leader of the DPP, win her first term. This has a parallel with the deeply unpopular Closer Economic Partnership Arrangement that passed in Hong Kong in 2003.

More recently, two months prior to Taiwan’s presidential election, China issued the 26 measures granting Taiwanese residents in China equal treatment with Chinese citizens. However, this policy only benefited those who already studied or worked in China. Such economic inducements have limited appeal for those who live in Taiwan.

Even though China is more powerful than Taiwan and Hong Kong, its economic leverage in shaping the political behavior of the people in both societies appears limited at best. Beijing ought to rethink the effectiveness of economic inducements and people-to-people ties for shaping attitudes in these two places.

Do you think President Tsai will take a more formal and direct role in aiding Hong Kong protestors? If she were to do so, what would be the implications for cross-strait relations?

Taiwan is certainly a strong supporter of the social movements in Hong Kong, and therefore many young people and activists in Taiwan sympathize and feel obligated to help activists find new lives in Taiwan. However, in my opinion, President Tsai would not make a formal move in aiding Hong Kong protesters, even if there where popular support for it.

A refugee law usually applies to one country’s decision to accept the political asylum of people from another country. Such country-to-country legal action between Taiwan and Hong Kong would be tricky given current China-Taiwan relations. If President Tsai were to take the initiative to draft a refugee law, it could be perceived as an attempt to disrupt the status quo in cross-strait relations and legally imply that Taiwan is a distinct country.

Admittedly, the existing regulations in Taiwan concerning people in Hong Kong and Macau have been inadequate in addressing their needs for political asylum. Accommodating the young protesters is a humanitarian concern for Taiwan, but the Tsai government also needs to consider the wider political implications, especially in light of the 2020 presidential election.

A more plausible scenario is for the government to strongly support the Hong Kong people’s aspirations for freedom and democracy, and handle the asylum applications for protesters on a case-by-case basis. President Tsai could also strengthen the existing laws that deal with political asylum from China, Hong Kong, and Macau. For example, her government could elaborate on the implementation details and provide a roadmap for future asylum seekers. Since the DPP controls a majority in the Legislative Yuan, Taiwan can send a clear message to the world that it stands with people who long for freedom and democracy without upsetting current cross-strait relations.

How do you think Beijing will respond to the re-election of President Tsai? What impact will her win have on cross-strait relations?

China’s state media has sought to downplay President Tsai’s victory, accusing her of using dirty tactics to gain votes and implying that “external dark forces” manipulated the results. In the coming months, Beijing will likely adopt a wait-and-see strategy for managing cross-strait relations, as the top leadership appears to consider President Tsai’s re-election a temporary setback for China’s reunification strategy toward Taiwan. The election could signal a cooling-off period for cross-strait relations, as President Xi Jinping and President Tsai have not yet reached an agreement to restart political dialogues.

As discussed earlier, Beijing’s efforts to pull Taiwan closer to its orbit, including through both economic pressure and incentives, military intimidation, and diplomatic coercion, have achieved limited success. The result of the election offered President Tsai strong support against China, as she vowed to defend Taiwan’s democracy and autonomy as long as she is in power. Given that more than eight million voters in Taiwan supported her policy, it might be an appropriate time for Beijing to reconsider the feasibility of the 1992 consensus and recalibrate its Taiwan policy.

Christina Lai is a Junior Research Fellow at the Institute of Political Science at Academia Sinica in Taiwan. Her research interests include Chinese foreign policy, East Asian security, and discourse analysis. She received her PhD in Government from Georgetown University.

Rachel Bernstein is an Intern with the Political and Security Affairs group at NBR.