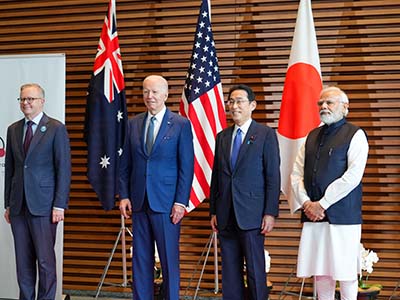 Podcast with Hayley Channer, Sheila A. Smith, Alison Szalwinski, and Akriti Vasudeva
May 27, 2022

In this episode of Asia Insight, moderator Michael Wills is joined by Hayley Channer, Sheila Smith, Alison Szalwinski, and Akriti Vasudeva for a discussion of perspectives of the four partner countries of the Quadrilateral Security Dialogue.

Hayley Channer is a senior policy fellow at the Perth USAsia Centre. She produces analysis on foreign and defense policy in the Indo-Pacific. She previously worked for the Department of Defense on Australia’s defense cooperation with the United States and Japan.

Sheila Smith is a senior fellow for Asia-Pacific studies at the Council on Foreign Relations. She is the author of numerous publications and books, including Japan Rearmed: The Politics of Military Power and Intimate Rivals: Japanese Domestic Politics and a Rising China.

Alison Szalwinski is Vice President of Research at NBR. She is the author of numerous articles and reports and co-editor of the Strategic Asia series. Her research interests include U.S. alliance relationships, U.S.-China relations, and the implications of great-power competition.

Akriti Vasudeva is a fellow with the South Asia Program at the Stimson Center. Her research focuses on U.S.-China-India strategic dynamics, geopolitics of Southern Asia and the Indo-Pacific, U.S.-India defense and strategic cooperation, and Indian foreign policy.

[4:43] How has Russia’s invasion of Ukraine changed strategic thinking in Japan?

[7:59] How does Tokyo view the “friendship without limits” announcement made between President Xi Jinping and Vladimir Putin in February? Has it changed or reinforced thinking in Tokyo about China’s situation and posture towards Japan?

[9:51] Given India’s reaction to the situation in Ukraine under Prime Minister Modi, as well as India’s complex relationships with China, Russia, and the United States, how is India viewing this evolving strategic landscape and how is it thinking about its strategic interests in this changing environment?

[14:16] Would India, like Japan, be willing to attend meetings with NATO? Given India’s concerns of stronger Russia-China alignment on India’s interests, would that prompt India to continue to strengthen ties with not only the United States and the Quad, but with NATO and key partners in Europe?

[15:43] How is Canberra broadly thinking about the Quad, Russia’s invasion of Ukraine, deepening Russia-China alignment, and how Australia’s is trying to balance its own interests with both the United States and China?

[18:03] How is Washington viewing this global strategic environment and how is it impacted U.S. strategic objectives and thinking toward the Indo-Pacific?

[23:08] Is there any domestic political pressure in Japan that will incline the country away from stronger security engagement with the U.S. and other Quad partners?

[28:20] Is there any domestic political debate within India’s national security establishment in terms of how the government bureaucracy is interacting with the military? Is the Quad something that India’s is seeking to see become more institutionalized as part of its strategic interests in the broader region?

[31:54] How internalized is the U.S. defense establishment with relation to the Quad? Are we seeing moves within the Department of Defense, the Department of State, and the Combatant Commands to institutionalize the Quad and U.S. relationships with Quad partners as part of U.S. strategic competition with China?

[36:16] Does Australia’s new government under Prime Minister Anthony Albanese portend any new changes in Canberra’s thinking or objectives about the Quad?

[39:37] How is Tokyo looking at the current situation involving the West’s failure of deterrence in Ukraine, the speculation about deterrence against China over the Taiwan Strait and North Korea’s nuclear and missile programs, and some speculation among the national security establishment in Tokyo to revisit U.S. extended deterrence on the Japanese archipelago?

[45:55] How is Washington grappling with the notion of deterrence and reassurance with its allies, specifically Japan and South Korea?

[49:36] Is there a similar debate taking place within the Australian national security establishment about deterrence, the failure of deterrence, and extended deterrence? How does the AUKUS arrangement play into deterrence debate?

[52:45] Is there debate taking place in New Delhi about these questions of deterrence and the role of nuclear weapons within the deterrence posture that India may be trying to achieve?

[55:08] Is the Quad mature enough to evolve as a security mechanism, or does it collapse under the pressure of the different kinds of networked relationships that are taking place?