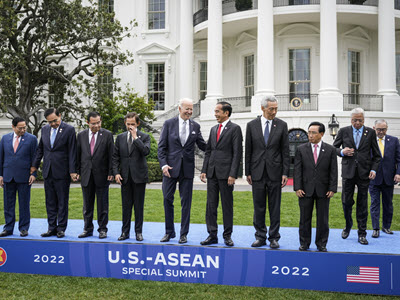 ASEAN and the United States convened a special summit in Washington, D.C., in May to celebrate four-and-a-half decades of the ASEAN-U.S. Dialogue Relations. Ann Marie Murphy reflects on the significance and outcome of the summit.

President Joe Biden called the recent summit between the United States and the Association of Southeast Asian Nations (ASEAN) a historic one that would usher in a “new era” of U.S.-ASEAN relations. In many ways, the summit was historic. It celebrated 45 years of relations, and the two sides committed to upgrade ties to a comprehensive strategic partnership, the same level as ASEAN’s ties with China and Australia. The summit was also the first time the United States hosted ASEAN leaders in Washington, D.C. This enabled them to meet not only with President Biden and State Department officials but also with Vice President Kamala Harris, six cabinet members, congressional leaders, corporate executives, and civil society leaders. This provided ASEAN leaders and a wide range of U.S. government, corporate, and civil society actors opportunities to network. Hosting the summit also allowed the administration to highlight ASEAN’s strategic and economic importance to a U.S. audience.

At a time when Southeast Asia has become the focal point of Sino-U.S. rivalry, the Biden administration sought to reassure ASEAN states that the United States is committed to the region and to ASEAN centrality after the Trump administration’s neglect. Convening the summit during Russia’s war against Ukraine and discussions of NATO expansion enabled Washington to demonstrate that it could retain its focus on ASEAN despite demands on U.S. attention elsewhere in the world. Only a year ago, Secretary of State Antony Blinken’s inaugural meeting with his ASEAN counterparts was canceled due to technical difficulties when he made an emergency trip to the Middle East, raising concerns about U.S. credibility.

Besides reassurance of the United States’ commitment to the region, another U.S. objective at the summit was to secure ASEAN support for the principles enshrined in its Indo-Pacific strategy. When the Trump administration announced the “free and open Indo-Pacific” strategy in 2017, it framed the strategy in terms of zero-sum competition with China, accompanied by unwanted pressure on ASEAN to choose sides. Perceiving this as a strategy to contain China, ASEAN responded by advancing the ASEAN Outlook on the Indo-Pacific, which emphasized the need for an “inclusive” region that included China rather an exclusive one that did not. By unilaterally promulgating a strategy that failed to incorporate ASEAN views, the Trump administration created perverse conditions in which ASEAN felt compelled to oppose the free and open Indo-Pacific strategy and support Chinese interests.

The Biden administration has taken stock of ASEAN interests and changed course, and a convergence of interests now exists between their respective Indo-Pacific strategies. According to Kurt Campbell, the administration’s Indo-Pacific coordinator at the National Security Council, the United States “recognize[s] quite clearly that any initiative that is simply designed for competition [with China] is likely to have difficulty gaining altitude in Asia.” The new U.S. Indo-Pacific strategy calls for an “inclusive” region, and the summit’s vision statement declares that the U.S. strategy and the ASEAN Outlook on the Indo-Pacific share “fundamental principles in promoting an open, inclusive, and rules-based regional architecture.”

President Biden’s nomination of Yohannes Abraham as ambassador to ASEAN, a post that has been empty for over five years, was widely welcomed. Abraham serves on the National Security Council and formerly was executive director of the presidential transition team, so he is close to the president and will be an effective advocate for U.S-ASEAN ties.

The United States announced $150 million of initiatives that will expand cooperation on maritime security, digital economy, environmental protection, clean energy, and people-to-people exchanges. From this funding, $60 million will support the maritime component of the ASEAN Outlook on the Indo-Pacific through capacity building and training. This initiative will be led by the U.S. Coast Guard, which is perceived as less threatening than involving the U.S. Navy in activities that could impinge on the South China Sea.

ASSESSING THE PROGRESS AND PROSPECTS

Some Southeast Asia observers claim that the new U.S. initiatives, particularly those involving security cooperation, reflect U.S. more than ASEAN interests. Others contend that health, climate, and education were issues raised by ASEAN last year, and their inclusion in Washington’s package is welcome. All observe that the U.S. package pales in comparison to the $1.5 billion China pledged last year. As illustrated by Malaysian prime minister Ismail Sabri Yaakob’s call for a “more active” U.S. trade and investment agenda, the lack of a comprehensive regional economic strategy is a weak link in Washington’s engagement with ASEAN. The U.S. Indo-Pacific Economic Framework (IPEF) was discussed informally at the summit. The IPEF focuses on standards for the digital economy, technology, resilient supply chains, clean energy, and climate change. The Biden administration wants the IPEF to be a “high quality” agreement, but it is unlikely that all ASEAN countries will be able to meet the stringent labor, tax, data privacy, and anticorruption standards required to qualify for membership. ASEAN leaders had hoped that the IPEF would be unveiled during the summit, but the administration decided to announce it in Tokyo at a Quad meeting. To some Southeast Asians, this decision signals that despite Washington’s rhetorical commitment to ASEAN centrality, the Quad has emerged as its regional mechanism of choice.

Myanmar was not invited to the summit, and both the U.S. and ASEAN sides reiterated their condemnation of the junta’s 2021 military coup and brutal crackdown on opposition forces. The United States has largely followed ASEAN’s lead toward Myanmar, and the summit’s vision statement pledges that both sides will support “ASEAN’s efforts to promote a peaceful solution in the interests of the people of Myanmar.” To date, support from China and Russia has enabled Myanmar to rebuff outside pressure and violate the five-point consensus it reached with ASEAN, leading some members like Malaysia to meet openly with the opposition National Unity Government of Myanmar, contravening ASEAN’s cardinal norm of noninterference.

The 2022 U.S.-ASEAN Summit created a solid foundation upon which to strengthen future ties, but both sides need to keep the momentum going. Showing up matters to ASEAN, so members will expect Biden to attend the November meeting. With the ASEAN, APEC, and G-20 summits all scheduled for November in Cambodia, Bangkok, and Indonesia, respectively, it is difficult to imagine Biden attending all three events so soon after the midterm elections. From the U.S. perspective, divisions among ASEAN’s diverse membership make it difficult for the organization to adopt common policies in a timely fashion and complicate cooperation. Given these headwinds, whether the 2022 U.S.-ASEAN summit will usher in a new era of bilateral relations remains to be seen.

Ann Marie Murphy is Professor and Director of the Center for Foreign Policy Studies in the School of Diplomacy and International Relations at Seton Hall University. She is also an Adjunct Senior Research Scholar at the Weatherhead East Asian Institute at Columbia University and a founding partner of the New York Southeast Asia Network.