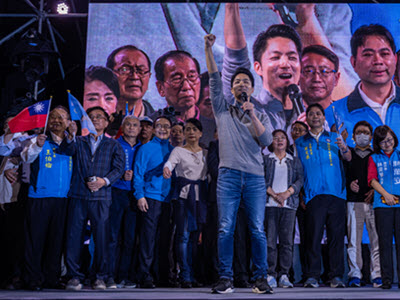 On November 26, Taiwan held local elections all across the country. Just as midterm elections in the United States and elsewhere often serve as a referendum on the incumbent party’s performance, Taiwan’s local elections were an opportunity for citizens to weigh in on the performance of President Tsai Ing-wen and the ruling Democratic Progressive Party (DPP) and hint at the prospects for her party and its main opposition, the Kuomintang (KMT), ahead of the next presidential election in 2024. To discuss this and other important issues in Taiwan politics, Daniel Schoolenberg interviewed Yu Ching-hsin, an expert on Taiwanese politics and public opinion polling.

In the leadup to the general elections on November 26, how would you describe the strategies and campaign messages of the two main political parties, the incumbent DPP and the opposition KMT?

For the DPP, the outbreak of the Covid-19 pandemic has rallied the Taiwanese around President Tsai’s flag, at least in 2020 and 2021. The Tsai administration was lauded for its successful quarantine and mask policies by both the international community and the Taiwanese public. Taiwan was able to deter the pandemic at the border. Meanwhile, the DPP government also actively engaged in the production of masks for domestic use and for foreign assistance. Even though the Tsai administration was later heavily criticized for its weak rollout of vaccines, the DPP continued to remind the electorate of its performance record during the pandemic.

By contrast, to the KMT, the shortage of vaccines and the DPP’s vaccine policy were both critical defects of the DPP’s governance. The KMT lodged various accusations, including that it failed to provide timely and sufficient vaccine supplies, that the DPP government intentionally obstructed vaccine donations from volunteer groups to nourish the government-sponsored vaccine-producing companies, and, worse still, that the government has shown no remedy to improve the sluggish domestic economy during the pandemic. Thus, according to the KMT, the DPP government should bear the responsibility for trillions of dollars in spending plus a death toll of over thirteen thousand in Taiwan.

What key issues dominated the elections? Was the continuing rise in cross-strait tensions a central voting issue? What lessons might we draw for the presidential election in 2024?

Conventionally, the issue of how the government performed during the pandemic was important. However, its importance was tainted by partisan mobilization in a highly polarized political context. In other words, with a polarized electorate, the pandemic became a partisan issue.

Notably, negative campaigning prevailed in local elections. Issues of integrity, such as allegations of plagiarism in a candidate’s master’s degree thesis and gangster affiliations, drew a lot of the electorate’s attention. Like in many other countries, negative campaigns often attract more of the electorate’s attention than bread-and-butter issues.

In local elections, national-level and external issues generally do not play a crucial role. But this is not true in Taiwan. The cross-strait issue has been engineered skillfully in 2022. There has been strong popular momentum toward an anti-China stance, due to the effect of the frustrated demonstrators in Hong Kong, accelerated U.S.-China competition, and the hostility of the Beijing government toward Taiwan. These developments, of course, facilitated the DPP’s accusation that the KMT takes a China-friendly stance. In the DPP campaigns, such an accusation was often heard in the speeches of top officials, including the president, the vice president, and the premier, who called the KMT a political party that would sell out Taiwan’s sovereignty to China.

According to National Chengchi University’s annual survey of Taiwanese voters’ party preferences, the largest category includes respondents labeled as independents. How have these voters tended to figure into past elections in Taiwan, and did this trend continue in the recent elections?

Political parties are necessary for Taiwan’s democracy; unfortunately, they are not welcome due to perceptions that they tend to overpromise in the pursuit of power. Equally important, citizens are generally reluctant to claim a partisan affiliation but continue to vote in elections for candidates mainly from the major parties.

For decades, most Taiwanese have not maintained clear partisanship. Around 50% of the electorate prefers to identify as independent or nonpartisan. These voters mainly come from two different sectors of the citizenry. One is the less educated, often more aged electorate. These nonpartisans show little interest in politics and are less informed, but they are frequent voters if they are mobilized by political parties, candidates, and personal networks in elections. Their electoral participation is more ritualistic than cognitive. The other group of independents, in contrast, is the well-educated, well-informed electorate. These voters do not constantly attach to or remain loyal to a particular party; they prefer to swing from one party to the other based on their judgments. Their participation is thus more cognitive than ritualistic. One phenomenal development is the partisan attachment of the younger cohort of voters. The younger generation tends to be less steadily attached to a specific party than the elder generation. However, their electoral turnout is also lower and less stable compared to other cohorts, according to some research. Yet, if they do participate, they tend to favor the incumbent DPP and other newly established minor parties.

Except in some heated areas, such as the mayoral elections in Taipei City and Taoyuan City, the partisan factor was more influential, as most elections continue to focus on candidates’ attributes and personal networks. In the 2018 local elections, the KMT claimed a majority and therefore enjoyed an incumbent advantage. This provided a crucial edge for the party in districts it has controlled since 2018, despite the DPP’s efforts to gain the upper hand.

What are the national prospects for third parties, such as the Taiwan People’s Party (TPP)? Do they have the potential to differentiate themselves from the two main parties or gain a greater role in politics?

Like minor parties in other countries, third parties have found it difficult to develop in Taiwan. Some of the reasons behind this come from institutional factors, some from partisan factors, and some from leadership and organizational factors.

The leadership of third parties has generally been unstable or very individualistic. Third parties are often characterized as one-person parties. They are first introduced and managed by a political star, yet they are far from institutionalized and have limited organizational capability. In nation-wide elections, third parties are incapable of garnering enough popular support to counteract the major parties. This will be the critical challenge for the TPP in the coming presidential and legislative elections in 2024.

In recent years, the reliability of pre-election polls has increasingly come into question, especially in the United States, in part reflecting growing distrust in institutions and the way people communicate over the phone. Do pollsters in Taiwan face the same challenges, and are elections becoming similarly unpredictable?

The polling industry has become riskier in Taiwan. This is in part because of rapidly changing communication technologies, but more so it is due to increasingly biased polls undermining popular trust. Several pre-election polls, for example, from Liberty Times and the Asia Pacific Elite Interchange Association have been criticized.

The results of election polls have multiple implications. Candidates need timely information about their relative status in the races and the policy preferences of the electorate. This feedback further expedites candidates’ campaign management. Unfortunately, impartial polls have been overshadowed by commissioned polls close to the political parties and candidates. The two major political parties have their own polling centers and alliances with media polling companies. Thus, two polls conducted at the same time and on the same targets often produce different results. In other words, election polls do not provide adequate campaign information; instead, they have turned into a self-serving instrument of electoral manipulation.

This is certainly a big challenge for polling research in Taiwan. In response, there are some academic and nonpartisan groups advocating for the proper use of elections polls such as the Taiwan FactCheck Center and the Chinese Communication Management Society’s poll transparency project. These organizations are devoted to fact-checking and conducting poll assessments based on professional guidelines. However, the difficulties of tracking biased election polls have overwhelmed these neutral groups. Hence, curbing the overflow of biased election polls during a campaign is still a challenge. Except for among strong partisan cohorts, the majority of the electorate appears to no longer have much confidence in election polls.

Yu Ching-hsin is a Research Fellow at the Election Study Center and a Joint Professor of the Graduate Institute of Development Studies at National Chengchi University in Taipei, Taiwan. He earned his PhD in political science from the Pennsylvania State University.

This interview was conducted by Daniel Schoolenberg, an Intern with the Political and Security Affairs group at NBR.