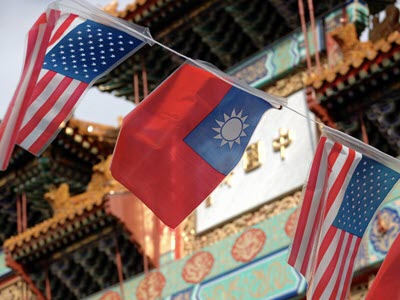 Strategic Clarity and the Future of U.S.-Taiwan Foreign Relations

For decades, the United States has been following a policy of strategic ambiguity to define its foreign relations with Taiwan. However, with the increased spotlight on Taiwan in U.S. foreign policy, a shift toward strategic clarity seems less improbable now than in the past. Kylie Del Rosario spoke with Raymond Kuo, a political scientist at the RAND Corporation, to discuss the future of U.S. foreign policy and relations with both Taiwan and China.

The United States seems to be inching toward strategic clarity, but it is hard to tell whether that’s a genuine though gradual policy shift or a result of how difficult it can be for even presidents to keep U.S. policy toward Taiwan straight. I personally advocate for clarity, as the strategic conditions giving rise to ambiguity no longer hold. Professor Timothy Crawford has done the best work on this question in his book Pivotal Deterrence. Historically, U.S. policy has had the primary goal of avoiding a cross-strait war, whether initiated by the People’s Republic of China (PRC) or the Republic of China (ROC). The United States would swing its decisive political, economic, and military power against whichever side was threatening conflict at that particular moment, and as PRC-ROC tensions shifted, so too would the U.S. response.

But that policy depends on three things. First, the United States must actually have decisive power. Second, both the ally/partner and the adversary have to want conflict or war. Third, both the ally and adversary have to be deterrable. The first and second conditions have transformed. A 2015 RAND Corporation analysis found that China has parity or even an advantage against the United States in six of nine warfighting domains in a Taiwan scenario. Taiwan definitively prefers the status quo and is uninterested in war, while China has not committed to a peaceful resolution and has increased its bellicose rhetoric and activities over the past five years. I believe China is still deterrable. That said, personalistic dictatorships—as the country is increasingly trending toward with Xi Jinping’s consolidation of power—can have volatile foreign policies, risking misperception.

What are the pros and cons of a policy shift to strategic clarity? There are dangers to strategic clarity, of course. I fully agree with experts such as Eric Sayers and Michael Hunzeker that clarity for its own sake would be a disaster without credible security cooperation to back it up. Taiwan should increase defense spending as a proportion of its GDP, and Congress can facilitate this by extending military export credits. The Department of Defense could clearly signal its defensive preparations with Taiwan. But I would view these policies as complements or prerequisites for strategic clarity, not as a replacement. As a political signal, clarity means nothing unless it is backed by actual and sufficient military capabilities. But, as I discuss in my latest book Following the Leader, clarity provides specific political benefits that military coordination alone cannot, such as prioritization against other defense commitments.

Of course, Beijing would be upset with a U.S. shift to clarity, which would feed perceptions that time is against Chinese leaders and that they must seize Taiwan now. In an ideal world, the United States and Taiwan could carefully choreograph their diplomacy to declare the goals and limits of strategic clarity. But China has strong and possibly justifiable reasons for not believing such assurances, or at least worrying about their durability.

That said, while considering China’s response is important, it is equally important we do not negotiate against ourselves. The United States should not unilaterally reduce its negotiating position without information from the counterparty (in this case, China). Beijing has not stated what its response would be to a clear U.S. defense commitment to Taiwan. Avoiding that commitment due to fear of this unstated response prioritizes China’s position, gives up negotiating leverage, and—most problematically—evades the question of whether strategic ambiguity still advances U.S. interests.

Instead, the United States and Taiwan should consider how such a policy would contribute to their security and broader relationship. First, addressing Taiwanese concerns about abandonment will lead to better military cooperation. Second, institutionalizing the commitment will provide the United States with policy levers with which to shape Taiwan’s defense policy or, if necessary, restrain it. Third, Asian allies increasingly view Taiwan as the litmus test for U.S. commitment to the region and its security as integral to their own.

Given that the strategic conditions prompting ambiguity have changed, what are the benefits of continuing that policy? Do U.S. leaders believe that China thinks that the United States will not intervene because Washington does not outright say that it will (or will not)? If the policy fails to deter China, then it is important for advocates to articulate the specific political—as opposed to military—benefits that it provides.

The United States and Taiwan share economic interests, political values, and concerns over the challenge posed by China’s military modernization. While there are several shared interests between them, is there also tension in this relationship? If so, what are the sources, and does China play a role?

Chinese foreign policy is certainly pushing the United States and Taiwan closer, and that makes it easier for Washington and Taipei to find agreement on their differences. Economically, the last major point of contention was the importation of U.S. pork due to the additive ractopamine. President Tsai Ing-wen accepted significant political costs in allowing imports. The decision survived a referendum called by the opposition Kuomintang party, clearing that issue from the U.S.-Taiwan relationship.

On security, the biggest disagreement concerns force posture and acquisition. What is the best way for Taiwan to defend itself? The United States favors an asymmetric defense concept, envisioning Taiwan bristling with anti-ship, anti-air, and anti-tank munitions, as well as a Taiwanese military and population committed to lasting, attrition warfare. However, as I’ve written recently, that strategy is predicated upon the United States coming to the rescue. If Washington decides not to intervene, or if it arrives too late to prevent a Chinese fait accompli, then Taipei will have reduced its ability to challenge certain Chinese provocations for no benefit. By contrast, strategic clarity would alleviate these Taiwanese concerns about abandonment, removing a key political obstacle to pursuing asymmetric defense and facilitating more effective security cooperation.

Amid increasing U.S.-China tensions over issues such as trade and regional leadership, President Biden asserted in late October 2021 that the United States would defend Taiwan if it came under attack. What might these shifting trends mean for the United States’ current relations with both countries and future policy stances?

It is important to note that, while improving U.S.-Taiwan relations certainly contribute to worse U.S.-Chinese relations, they are only one part of a broader downturn between Beijing and Washington over trade, regional revisionism, democracy versus authoritarianism, and fears about rising power over at least the past six years. Economic and social ties between the United States and China restrained hostility for the past 30 years, but these ties are increasingly a domestic political liability in the United States. Skepticism of China is now a feature of both Republican and Democratic foreign policies and voters. President Biden is continuing the momentum generated by the Trump administration, albeit with much better alliance management.

This downturn makes it easier for the United States to work more closely with Taiwan. Clarity would “lock in” the China-skeptic shift in U.S. foreign policy. An unambiguous American declaration jettisons engagement for containment, signaling a decisive break in U.S.-China relations. It would raise credibility and reputational costs among U.S. allies like Japan and the Philippines, preventing Washington from walking back the policy. And Washington would likely fold Taipei formally into broader, multilateral security discussions and planning, building on summit statements with Japan and South Korea declaring the Taiwan Strait an issue of regional interest.

However, China would reduce or halt cooperation on areas like climate change and nuclear nonproliferation. But the degree to which this would be due to strategic clarity toward Taiwan specifically, rather than the overall and ongoing downturn in U.S.-China relations, is difficult to gauge, especially amid a continuing trade war, the AUKUS partnership (between Australia, the United Kingdom, and the United States), and the diplomatic boycott of the Olympics.

Switching to a more hypothetical situation, if China were to assume control over Taiwan, what would be the possible cascade of effects? How might the power dynamics of Asia and the greater Indo-Pacific change?

I’m going to assume this is a Chinese military conquest of Taiwan and that Beijing imposed a fait accompli before the United States could mobilize. First, U.S. credibility as a security partner would be cratered. Japan, South Korea, and especially the Philippines would seek closer security ties, as well as assurances that Washington has plans to uphold their defense treaties. Asian states that are currently hedging against both the United States and China (like some ASEAN members) would begin bandwagoning with the latter.

Second, Douglas MacArthur once called Taiwan “an unsinkable aircraft carrier” allowing the occupant to project power into the Pacific and splitting Northeast and Southeast Asia. In the same way that the United States wants Taiwan to be a porcupine against Chinese invasion, Taiwan could serve that same function in reverse under PRC hands, able to “checkmate counteroffensive operations by United States Forces based on Okinawa and the Philippines.”

This exacerbates a third cascade effect. Under PRC control, the Taiwan Strait would become a chokepoint for goods and commodities flowing toward Japan and South Korea. In addition, China would control Taiwan’s semiconductor industry and other advanced technology firms.

Going back to my assumptions, if China were to defeat the United States in order to seize Taiwan, I would expect that to augment these three effects. The outcome would be a Beijing more willing to use its position and power (and comparative U.S. weakness) to advance its policy preferences and rules in the region.

Raymond Kuo is a Political Scientist at the RAND Corporation, where he focuses on international security in East Asia. His most recent books are Following the Leader (2021) and Contests of Initiative (2021).

This interview was conducted by Kylie Del Rosario while an intern with the Energy and Environmental Affairs group at NBR.