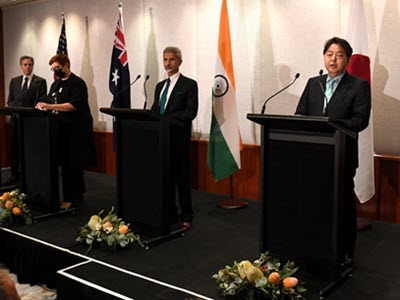 The Indo-Pacific region is facing a host of daunting maritime challenges, including increasingly frequent and extreme weather events due to climate change, ocean pollution, pressure on fishing stocks, and threats to maritime commerce, among many others. The Republic of Korea (ROK) has an important stake in mitigating these concerns. Yet, none of these problems can be solved by any single government; instead, they require cooperation among like-minded states to achieve solutions.

One way in which South Korea can contribute is through participation with the Quad coalition of Australia, India, Japan, and the United States, possibly through creation of a maritime working group that increases collaboration on these pressing problems. ROK leaders and analysts continue to debate the wisdom of joining the coalition, but newly elected President Yoon Suk-yeol has indicated support for the Quad and its goals, along with an interest in working with the Quad and eventually joining as a formal member. This commentary argues that participation in Quad activities, such as a future maritime working group that addresses disaster relief and reducing illegal fishing, can help strengthen South Korea’s role in improving maritime security.

For the past decade, a dominant concern for ROK foreign policy has been being caught in the middle of U.S.-China rivalry. The U.S. alliance continues to be central to ROK security, and it has evolved into a political and economic partnership that goes well beyond a security relationship. The views of most ROK leaders and analysts, as well as outcomes from public opinion surveys, point to a strong consensus for maintaining the alliance. Yet, the reality of China’s importance remains. Chinese trade and investment are crucial to ROK prosperity, with total bilateral trade exceeding South Korea’s trade with the United States and Japan combined. Moreover, Beijing is viewed as an important player for Seoul in handling relations with North Korea, though confidence in Chinese help is waning. Thus, South Korea must carefully manage its ties with Beijing to avoid unnecessary friction, despite the strategic value of South Korea’s alliance with the United States and ROK polling data indicating an increasing dislike for China.[1] So far, South Korea has pursued a hedging strategy best described as “strategic ambiguity” to tread carefully between Beijing and Washington. Should U.S.-China relations deteriorate further, it may become increasingly difficult for South Korea to sustain this position.

Over the past few years, South Korea has faced another dilemma in its hedging strategy—whether and how to participate in an expanded iteration of the Quad. Prior to the summit between Presidents Joe Biden and Moon Jae-in May 2021, there was speculation that Washington would press Seoul to join an expanded “Quad Plus” arrangement. Although Biden did not push the issue, likely because he knew that Moon’s answer would have been no, the dilemma of Quad engagement remains for the ROK government.

Thus, South Korea faces a difficult decision regarding Quad participation that hinges on the direction the group chooses to take. Will the Quad be a collection of like-minded states that seeks to address common challenges, or will it be an anti-China coalition intending to balance Beijing’s rising power? The two Quad summit meetings in 2021 were careful to downplay their gatherings as a response to China, focusing instead on “promoting the free, open, rules-based order, rooted in international law and undaunted by coercion to bolster security and prosperity in the Indo-Pacific and beyond,” along with support for “the rule of law, freedom of navigation and overflight, peaceful resolution of disputes, democratic values, and territorial integrity of states.”[2] The members have formed three working groups addressing Covid-19 vaccines, climate change, and critical and emerging technologies. Though the Quad has not mentioned China by name within joint statements, it is clear that several issues of common concern have a China connection, including the importance of international law—particularly the United Nations Convention on the Law of the Sea (UNCLOS)—and maintaining a rules-based maritime order in the East and South China Seas.

Although ROK analysts continue to debate the wisdom of joining a Quad Plus coalition, the Moon government decided to refrain from formal membership while participating in ways that do not overtly antagonize China. In March 2020, South Korea began attending Quad working group meetings on the Covid-19 response and vaccines with New Zealand and Vietnam. While South Korea agrees with the values professed in Quad statements, it has been careful to bide its time to see what direction the coalition will take before deepening its engagement with the group.[3]

OPPORTUNITIES FOR ENGAGEMENT WITH THE QUAD PLUS

If South Korea were to continue participating informally in the Quad Plus, one possibility for greater engagement would be through the formation of a maritime security working group. The Quad has already established a climate change working group to address carbon emissions, temperature rise, clean energy, and resilience—vital factors in mitigating the impact of climate change on maritime security. South Korea shares these concerns and would be a valued participant to help address them. As states struggle to turn the tide on climate change, climate-related disasters in the Indo-Pacific region continue and require rapid crisis response as well as longer-term disaster relief. As the ROK Navy continues to grow in size and capability, it could be an important contributor and leader in these efforts to mitigate climate-related calamities. Participating navies in a maritime security working group could conduct exercises for disaster relief operations along with planning efforts for dealing with future weather catastrophes. A Quad Plus naval coalition could be an institutionalized first responder that fits within the broader effort to address climate change.

Another initiative for a Quad Plus maritime security working group could be addressing the problem of illegal, unreported, and unregulated (IUU) fishing. Maintaining a secure and sustainable ocean economy is in the interest of all states. Many in the region, particularly in Southeast Asia and Oceania, have large exclusive economic zones (EEZs), where they have sovereignty over the resources in the seas that stretch 200 nautical miles from their coast. However, many of these governments lack the naval and coast guard capabilities to protect their seas from IUU fishing.

The ROK Navy and Coast Guard possess the capability and expertise to help states secure their EEZs in several ways, including through personnel exchanges and maritime information sharing, along with participation in training exercises and joint operations. Over time, this endeavor could evolve into a broad, multilateral effort to protect these valuable resources that are endangered by overfishing. Finally, as the ROK Navy and Coast Guard continue to modernize their fleets, decommissioned ships could be transferred or sold to governments needing to increase their maritime patrol capabilities. South Korea has already concluded several deals with the Philippines for old ships and the construction of new vessels that could be broadened to other countries who need them.[4]

Time will tell whether and how South Korea may decide to participate in an expanded Quad, but President Yoon has shown considerable enthusiasm for working with the group. Although the future of a Quad Plus is uncertain, there may be ways for South Korea to contribute to activities that align with its interests, regardless of any formal decision to join the group. The ROK’s maritime interests are becoming increasingly important, and its capabilities to support multilateral efforts in safeguarding the maritime environment continue to grow. These issues are too important for South Korea to not be a key contributor to maritime security in the region.

Terence Roehrig is Professor of National Security Affairs at the U.S. Naval War College. The views expressed here are the author’s alone and do not represent the official position of the U.S. Navy, the U.S. Department of Defense, or the U.S. government.