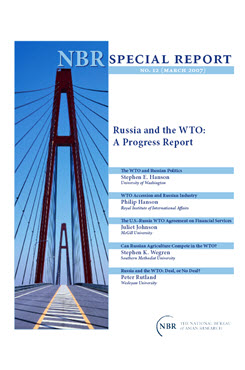 Russia and the WTO
A Progress Report

In this report, five distinguished specialists on Russian politics and economics assess the remaining obstacles to full Russian WTO membership as well as the likely effects of Russian accession on the country’s economic development and relations with the West.

The November 2006 announcement of the conclusion of bilateral negotiations between the U.S. and Russia concerning the Russian bid to join the World Trade Organization (WTO) generated great initial optimism that Russia’s formal accession would soon be concluded. Careful analysis suggests that Russian inclusion in the WTO, paradoxically, may be more important politically than it is economically. The short-term impact of Russian WTO membership on key economic sectors such as energy production, finance, and industry will likely be marginal; only in the agricultural sector is WTO membership likely to provide a serious impetus toward greater market efficiency. The symbolic political effects of full Russian inclusion, however, would be extremely important, eliminating a major irritant in Russia’s relations with the West.