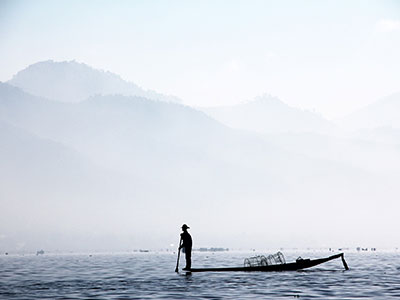 Myanmar
What Is Next for Business Engagement?

Erin Murphy and James Clad draw on their extensive knowledge of the Asia-Pacific region to offer unique insight into what is to come for foreign business engagement in Myanmar.

Three years have passed since the Myanmar government began taking steps toward opening the country to the world and reforming its most backward and draconian political and economic systems. Foreign governments, including the United States and the European Union (EU), lifted or suspended regulatory regimes that prevented investors from entering the market, assuming that the most significant barriers to market entry were Myanmar’s own policies. Some senior Western officials, as well as human rights groups opposing normalization with Myanmar, once were concerned that easing most restrictive financial and trade sanctions on the former pariah state would quickly thrust multinational brand-name firms looking to exploit cheap labor and a wealth of natural resources into one of Asia’s last remaining frontier markets.

However, this scenario has not materialized. Business opportunity scouts have come to realize that the challenges to entering Myanmar’s market go well beyond U.S. and other Western sanctions periodically imposed since the early 1990s. Outside business interests encountered the effects of a half-century of self-imposed isolation, well-greased systems rewarding Myanmar’s outsized military, and preferential treatment for investors from adjacent countries with predatory business cultures—notably China, but also others in East and Southeast Asia.

Overshadowing all of these obstacles remains the impact of decades of declining infrastructure, in both the social and physical sense. Myanmar remains a very underdeveloped country as measured by most conventional indices. The World Bank in October ranked Myanmar 177 out of 189 countries for ease of doing business, only five spots higher than the previous year. [1] The ranking reflects the high cost of doing business, the opaque and ever-changing regulatory environment, dilapidated or nonexistent infrastructure, huge capacity issues, major reputational issues, and ongoing tensions with ethnic minority groups and antigovernment movements.

Specifically, the cost and time to register a business in Myanmar is higher and longer than nearly all developing countries. Quality office and living space remains very limited and astronomically expensive: representatives from the United Nations Children’s Fund (UNICEF), the World Health Organization, and the EU have all been criticized for paying tens of thousands of dollars per month in rent to former junta officials. [2] Leasing and ownership laws deter foreigners from owning land or renting for more than one year–residents must pay yearly rent upfront and in cash—forcing investors constantly to move offices and residences, falling into a vortex of ever-higher prices. Frequently changing laws further cloud the overall investment environment. Myanmar’s parliament is playing catch-up, updating hundreds of separate statues, many dating back to British colonial days.

Power generation, connectivity, and infrastructure count among the biggest investor headaches. Capacity issues—meaning the inability to administer and implement new rules—afflict the full spectrum of the workforce, from government servants to potential private employees. The recent reformist agenda collides with a much longer history of punishment—either job termination, relocation, or arrest—for working outside the narrow directive scope coming solely from the top of the military hierarchy. Myanmar’s government, its political opposition, and the fragile urban-based civil society have all continued to take tangible steps to return Myanmar to its heyday in the 1950s when “Burma” served as a byword for regional excellence in academics, agribusiness, and banking. Part of the problem for new investment comes from a very thin cadre of reform-minded technocrats simply being overburdened. And an avalanche of well-intentioned foreign advisers has similarly overwhelmed the higher echelons of the Thein Sein government.

Meanwhile, complex and multilayered constitutional arrangements slow momentum further. Myanmar continues to grapple with its disproportionately large military apparatus, which will remain a political powerhouse given its parliamentary veto powers, claim to the most influential ministerial positions, stake in a myriad of investments, and overwhelming physical presence throughout the country. In addition, Myanmar’s historical issues, particularly its efforts at national reconciliation with dozens of ethnic minority groups, directly and indirectly affect investors. Armed rebel groups, which often want a share of the profits from natural resource investments, in the past have bombed infrastructure such oil and gas pipelines.

Myanmar’s opening to the world was never going to produce automatic results. The policy debate often forgets that global and regional economies work to non-country specific rhythms. Whether Myanmar or Thailand, Brazil or Mozambique, investor “constants” include foreign-exchange risk, commodity price trends, cost of capital and risk insurance, and comparative labor costs—meaning the existence of steadily less invidious costs of doing low-end business elsewhere in the region, as in Vietnam or Cambodia. Even in Mexico and countries in South America, where many individuals are blacklisted because of alleged ties to drug traffickers, international trade continues to flow, and no one thinks it is particularly problematic doing business.

These features of Myanmar’s risk landscape have not kept out some foreign investors—nor should they stop experienced U.S. companies. Japan, for example, has been leading a comprehensive investment approach. Its plans for Myanmar’s special economic zones, infrastructure development projects, and a cross section of industries—banking, automotive, food and beverage, and consumer products—have political backing from the highest level of the Japanese government. South Korea, Norway, France, Germany, Canada, Qatar, Indonesia, and Thailand also tout their post-2012 investments.

Multilateral and bilateral monetary and technical assistance from the United States, Japan, Europe, the Asian Development Bank, and the World Bank targets rebuilding the banking and regulatory systems. Initiatives to increase power generation have also received funding. Myanmar wants its laws to be more investor friendly and has adopted anticorruption laws, the Extractive Industries Transparency Initiative, and various best practices for global corporate conduct. This approach is working—major tender offerings and licenses for telecommunications, banking, oil and gas, and airport construction have flowed since 2012. By most accounts, the bidding has been transparent and well-managed.

The United States, however, is still largely missing from the investment landscape. Individually or via trade associations, major U.S. firms had long sought the removal of sanctions on Myanmar and the reinstitution of commercial ties. U.S. business delegations began visiting Myanmar once U.S. policy had changed. Just two days after sanctions eased in mid-2012, for example, the U.S-ASEAN Business Council sent a delegation to kick off business engagement. Since then, General Electric, Coca-Cola, Pepsi, Proctor & Gamble, Ford, MasterCard, Visa, and Western Union all have entered the market. More recently, the Ball Corporation, Colgate-Palmolive, and Gap have announced investments. These moves paralleled visits by several U.S. cabinet secretaries, including the secretaries of state and commerce, and two visits by President Obama, highlighting the importance of Myanmar to the United States.

Altogether, U.S. companies have announced approximately $612 million of investments in Myanmar since 2012, which is significant but still well short of anticipated levels. [3] Despite the pioneers, other well-known brands have shied away: McDonald’s, Starbucks, Target, and Walmart have yet to enter Myanmar. These firms have slipped into risk-averse mode, with some pausing their search for opportunities and others opting to stay away altogether. It would seem that because of rapid turnover of regionally savvy corporate executives, institutional knowledge of working in frontier markets has been lost. For these companies, there is no compelling reason to take the risk of entering such a difficult market that may not result in a substantial return on investment and be worth the effort. For investors, especially those without existing positions, the rapid domestic and societal reforms over the past two and a half years have not reached a tipping point; companies prefer to avoid the short-term pains of uncertainty and forgo, if that is what they are doing, the possibility of long-term gains.

While caution is well warranted, such hesitation may leave slow-moving firms behind as competitors from the EU, Japan, and even Australia seize the moment. U.S. companies should be cognizant of the deeply embedded downside of not entering this emerging tiger’s markets, while accepting that a widening arena of market entrants is here to stay in an increasingly important regional country that craves growth and development. Myanmar wants U.S. engagement, from the top levels of government to the samosa hawkers on the street. Many U.S. companies appear to be waiting for a quicker resolution to the many obstacles or for a clear-cut sign, whether it is a free and fair 2015 election or directive and support from the U.S. government. But waiting too long will result in lost opportunities. In considering the many challenges in Myanmar, U.S. businesses may not want to take the inherent risks associated with this emerging economy, at least for now. But these companies will also have to weigh the risks if they wait; a delay may result in picking up scraps or fixing the costly mistakes companies made before them.

Erin Murphy is Founder of the Myanmar-centric advisory firm Inle Advisory Group. James Clad is Senior Adviser to IHS Jane’s Defence Group in London and Alexandria. The views expressed are those of the authors.