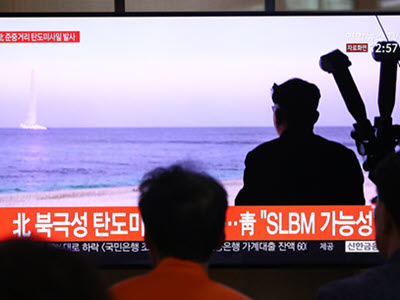 Missile Proliferation in the Indo-Pacific
Drivers and Consequences

In recent years, countries across the Indo-Pacific have been developing and procuring an increasing number of advanced missile systems, including some that are capable of delivering nuclear payloads. As nations in the region invest more in advanced missile systems and missile defense systems, there is growing concern over whether these systems are enhancing deterrence or instead deteriorating the security environment. Thomas Santos spoke with Ankit Panda from the Carnegie Endowment for International Peace about the strategic implications of missile proliferation.

In the past decade, we have seen a surge in the number of nations in the Indo-Pacific developing or procuring new advanced missile systems, particularly intermediate-range ballistic missiles and hypersonic missiles. What accounts for this trend? What advantages or capabilities do these missile systems provide to armed forces?

Almost universally, policymakers in the Indo-Pacific—particularly in East Asia—perceive a worsening security environment. This is true of U.S. allies, like South Korea, Japan, and Australia, as well as U.S. adversaries, like China and North Korea. Military spending in Asia has risen considerably over the last two decades and missiles—particularly precise, conventional, or dual-capable missiles—are seen as offering an important set of capabilities.

There is no universal military rationale for why countries see value in missile capabilities. For a state like North Korea, missiles are an essential component of operationalizing credible nuclear deterrence. The Chinese People’s Liberation Army, the possessor of the region’s largest missile arsenal by far, sees these capabilities as an important enabler of conventional deterrence and possibly nuclear escalation management. South Korea, meanwhile, has built up a non-nuclear missile force to hold at risk an array of North Korean military targets; moreover, political considerations, like the transfer of wartime operational control within the U.S.–South Korea alliance, have also motivated Seoul’s investments. Japan, with its traditional constitutional limitations on offensive capabilities, is in the process of studying the extent to which a counterstrike capability would contribute to its national defense. Taiwan last fall approved a massive supplementary spending package of $8.6 billion in part to build up missiles to bolster its ability to impose costs on an invading Chinese military. Finally, Australia is setting up major conventional missile production capabilities (with assistance from the United States as part of the AUKUS trilateral partnership with the United Kingdom).

Where decision-makers in these countries are aligned is in their perception that missiles can contribute to general deterrence in peacetime and deliver significant strategic effects in wartime, while remaining more cost-effective and survivable than other long-range strike capabilities, such as fighter aircraft or bombers. With ballistic missiles, in particular, promptness is also seen as a feature and not a bug. On the Korean Peninsula, for example, flight times for ballistic missiles can be on the order of a minute or two. Conventional and nuclear escalation risks arising from the proliferation of these capabilities have been largely overlooked by policymakers in the pursuit of deterrence objectives.

Has the proliferation and development of new missile technologies by China and North Korea affected regional stability and the national security strategies of countries in the Indo-Pacific?

The effects on stability of new missile developments in China and North Korea are varied. The strategic nuclear deterrence relationship between China and the United States is unlikely to become significantly destabilized should China proceed to deploy novel intercontinental nuclear delivery systems, such as the experimental orbital glider release system it tested last summer. In short, the United States is already vulnerable to Chinese nuclear warheads delivered by ballistic missiles; so while a warhead that arrives on a U.S. target after an orbital insertion might be technically impressive, it does little to alter the strategic balance. China’s quantitative expansion, with over 300 new silos for intercontinental ballistic missiles (ICBMs) in its western desert, is an arguably greater concern. Beijing’s opacity, however, means we lack critical information and understanding of the political intent behind this buildup. One answer could be that China is seeking greater survivability for its nuclear forces against U.S. conventional attack and missile defenses. But simply put, Xi Jinping has not told us.

The nuclear deterrence relationship with North Korea is gradually developing. As North Korea builds out its nuclear forces, it may gain confidence in its nuclear deterrent. One concern for regional stability is that this confidence could encourage Pyongyang to engage in riskier behavior to coerce South Korea to change its policies and practices—as happened in 2010 with the sinking of the ROKS Cheonan and the shelling of Yeonpyeong-do.

One of the major stability concerns with North Korean and Chinese theater-range missile capabilities relates to the incentives for preemption. While this concern is less acute in the case of China, given its significantly larger arsenal and robust nuclear deterrent, North Korea, in a crisis, will be particularly concerned that South Korea and the United States, with their superior intelligence, surveillance, reconnaissance, and precision-strike capabilities, may seek to destroy much of its missile infrastructure and command-and-control capabilities. This will create significant pressure to release these weapons lest they be lost—a “use-or-lose” dilemma. This being said, these preemption concerns do not grow noticeably more serious with novel missile technologies.

Policymakers have wanted to shoot down missiles virtually as soon as the missile age began, but an insurmountable problem to this day is developing a defensive system that is cost-effective against even a significantly less resourced opponent (such as North Korea). Attackers can cope with missile defenses with both quantitative measures (i.e., build more missiles or put more warheads on missiles) or qualitative measures (i.e., build gliding missiles or advanced countermeasures for existing missiles). China, North Korea, and Russia are doing both to varying degrees. China and Russia have invested in non-ballistic, maneuvering hypersonic boost-glide weapons specifically to stress and defeat U.S. and allied missile defense technologies, which were built up over decades with more rudimentary missile types in mind.

Stability considerations differ with strategic- and theater-range hypersonic missiles. Strictly speaking, stable nuclear deterrence depends on an adversary perceiving its second-strike capabilities to be secure. China and Russia have long disbelieved U.S. assurances that the United States’ limited homeland missile defense capabilities are directed exclusively at North Korea and perhaps Iran. Unsatisfied with these assurances, Beijing and Moscow have taken matters into their own hands.

Russia has emphasized strategic-range boost-glide weapons, having deployed the Avangard glider on an ICBM. China has not yet deployed any intercontinental-range gliders but has operationally deployed the DF-17 hypersonic boost-glide system. This is a theater-range system that is designed to hold at risk military targets along the first island chain. Stability concerns here are slightly different, because the DF-17 is not a strategic nuclear system per se. While similar concerns about theater-range missile defenses likely motivated the development of the DF-17, its speed and ability to penetrate missile defenses could raise pressures on U.S. and allied leaders to consider preemption in a crisis. Finally, as highly maneuverable weapons, hypersonic gliders can introduce a target ambiguity problem. Once launched, it is unclear to the defender where they will end up (though cruise missiles and certain ballistic missiles can pose this same problem).

Hypersonic missiles will not be the last word in the decades-long cat-and-mouse game between offense and defense when it comes to missile technologies. An action-reaction cycle is at work whereby an advancing perceived threat from China and North Korea promotes interest in missile defense, which in turn further promotes advances in offensive capabilities in those countries. The United States is already studying “glide-phase intercept” concepts to cope with these systems and exploring new space-based sensors to track these weapons. Without measures of negotiated restraint, these developments are likely, in practice, to drive regional and U.S. policymakers to see more, not less, value in missile defense. And so, the regional arms race might chug along.

Do you expect that the development and deployment of hypersonic missile systems will shape future U.S. force posture in the region in the long term? What steps should the U.S. and its allies and partners take to address the regional challenges posed by missiles?

The development and deployment of systems like China’s DF-17—and potential new hypersonic systems—will expand the breadth of the missile threat to U.S. and allied bases along the first island chain. These systems will stress existing missile defense capabilities that have been optimized to cope primarily with ballistic threats. By fielding these systems, Chinese military planners may become increasingly confident that they might succeed in inflicting militarily useful damage against facilities that would enable a robust U.S. and allied intervention in a future Taiwan Strait contingency, to offer one example.

Meanwhile, U.S. interest in long-range conventional precision-strike capabilities is not new, but there has been a greater emphasis in recent years on theater-range conventional precision-strike capabilities. However, many of the new systems that are being built do not yet have any willing U.S. allies to base them in the Indo-Pacific and may lack sufficient range to hold at risk targets in China or North Korea from a U.S. territory (most likely Guam). Despite the focus on new ground-based missile capabilities following the collapse of the Intermediate-Range Nuclear Forces Treaty, the United States will continue to rely on sea- and air-based platforms for long-range strike missions in this region. New hypersonic capabilities are likely to constitute a meaningful part of these capabilities.

Addressing challenges will first require a common understanding between the United States and its allies about the nature of the missile challenge in this region. Unlike NATO, there is no common military command apparatus in Asia that allows Washington to consult with its allies on strategic matters and promote a unified security concept. This has made a transregional coordinated effort on missile-focused risk reduction—or general military restraint—more difficult.

Both China and North Korea remain averse to negotiated restraints on their capabilities. At the 2019 U.S.–North Korea summit in Hanoi, North Korea showed some openness to constraining its production of fissile material for nuclear weapons, but did not open up its missile forces to verified limits. Pyongyang’s moratorium on long-range missile testing has fully crumbled with the resumption of ICBM tests. At a high level, the United States and its allies agree that the missile capabilities of China and North Korea pose a significant threat. The next steps should involve considering risk-reduction processes and formalized measures of restraint. At the same time, pursuing these options should not preclude the United States from taking its alliance commitments or conventional deterrence seriously; to the contrary, risk reduction and deterrence can coexist and be mutually reinforcing.

Ankit Panda is the Stanton Senior Fellow in the Nuclear Policy Program at the Carnegie Endowment for International Peace.

This interview was conducted by Thomas Santos, a project associate with the Political and Security Affairs group at NBR.