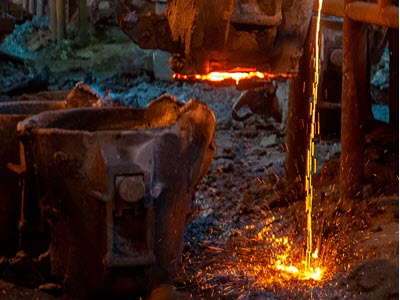 Indonesia is home to 22% of the world’s nickel reserves, and its ban on nickel ore exports since 2020 has caused major shifts in the supply chains of strategic products such as electric vehicles and rocket engines. Arsalan Ahmed discussed this issue with Michael Merwin, an expert on international supply chains with nearly 30 years of experience in the private sector. Merwin highlights the emerging role of Indonesia in nickel and other supply chains and explains how the country’s ban on exports affects the United States, China, and Southeast Asia.

Are there unique properties of nickel, its supply chain, and downstream products that are important for understanding the implications of Indonesia’s decision to transform nickel supply chains?

The largest use of nickel is in the production of stainless steel, with approximately 75% of nickel processed into stainless steel. However, nickel is also a crucial material in the production of electric vehicle (EV) battery cathodes, which are necessary for the green energy transition. Current EV battery demand consumes around 7% of global production, but expected increases in EV demand will cause an exponential growth in demand for nickel. Therefore, many car companies cite securing nickel for their EV batteries as a top priority.

Nickel reserves are quite plentiful, with wide dispersion in developing countries and territories such as Indonesia, the Philippines, Russia, and New Caledonia, along with Western-aligned democracies such as Canada and Australia. Concerning the world’s two largest economies, the United States has minimal reserves, while China’s reserves are less than 3% of the global total. Therefore, both countries rely heavily on the import of nickel ore or refined nickel.

While nickel is plentiful, the quality or class of reserves determines its suitability for stainless steel or battery cathodes. Class 1 nickel is critical for EV batteries. However, reserves of Class 1 are smaller and less distributed than Class 2 and therefore form a chokepoint in the EV battery supply chain. While Indonesia’s nickel reserves are the largest in the world, these reserves are predominantly Class 2.

However, there are environmental concerns with the HPAL process: it consumes water, produces caustic tailings, and consumes considerable energy. Many Western EV car manufacturers question whether the process meets the ESG standards their customers expect. In addition, the capital costs to build the processing facilities have proved to be very high with the accompanying cost overruns associated with new technological processes.

What motivations or goals promoted Indonesia to implement this ban on nickel ore exports? How successful has the ban been in helping Indonesia accomplish these goals?

Indonesia’s 2020 decision to halt the export of nickel ore is a continuation of its industrial policy to produce downstream materials and products in the nickel and EV battery supply chain. In 2014, Indonesia successfully employed a similar export ban to develop downstream value-added nickel products for the stainless-steel supply chain. Aided by China’s large demand for stainless steel, Indonesia created a well-developed intermediate nickel product and stainless-steel industry. In 2021, it was the second-largest producer of stainless steel in the world. The motivation of the new law is to reinforce the industry while also trying to replicate this success in the EV battery market.

However, the quality of Indonesia’s nickel reserves will require a multiyear two-step process of technological upgrades to achieve this objective. First, Indonesia must develop the ability to economically refine Class 2 nickel on a large scale into MHP. Next, it must create the industrial processes and infrastructure and investments to transform MHP into cathodes and EV batteries. Indonesia also faces an environmental hurdle: over 50% of its electricity is generated by coal, exacerbating the energy consumption and environmental degradation issues inherent in the HPAL process.

Despite these obstacles, the strategy has demonstrated some success as several MHP investment projects have been announced. Chinese companies are involved in many of the projects. These include Halmahera Persada Lygend, a joint venture (JV) between Indonesia’s Harita Group and China’s Ningbo Lygend and Huayue; and a JV of Huayou, Chinese stainless-steel giant Tsingshan Holding Group, and China Molybdenum Co. Approximately five other projects are under consideration or beginning construction. The Halmahera Persada Lygend project achieved initial commercial success in June 2021 to produce MHP. Progress toward step two began in late 2021 when a South Korean consortium broke ground on an EV battery plant scheduled to reach mass production in 2024. For Indonesia, success will be measured over many years as it builds out MHP capacity and attracts other EV car companies to locate battery production within the country.

Given that China’s strategy in Southeast Asia is far more robust than that of the United States and others in the region, has the ban affected Chinese industries?

Indonesia’s export ban may create some commercial disadvantages for China, but there are also commercial advantages and strategic gains. While all countries are facing a shortage of refined nickel products for EV batteries, China’s issue is more acute as the country leads the world in EV production. Therefore, a secure supply of refined nickel is critical to Chinese industries. Indonesia’s strategy forced Chinese EV companies, and by extension the Chinese government, to switch from importing nickel ore to assisting in the development of HPAL/MHP production facilities in Indonesia. While there is no direct evidence, it seems unlikely that Indonesia would make such a decision without consulting Chinese government officials and EV companies beforehand.

As a result, China is deploying a hybrid strategy that secures its supply of nickel products while maintaining a degree of control. Through its investment in HPAL/MHP technology and JVs in Indonesia, China secures a supply of MHP and relieves a supply chain bottleneck. Even though the JVs must share future profits with Indonesian partners, China avoids increased demand on its strained energy grid as well as environmental degradation issues related to the HPAL process. In addition, China further strengthens its business and political relations with Indonesia.

The interesting question is whether Indonesia can achieve the second step in its strategy. Will another Chinese, Asian, or Western automotive company move EV battery production to Indonesia? Given that China is the largest market for EV batteries, Indonesia’s ultimate objective is highly dependent on China’s decision with respect to the manufacture of batteries. While supply chain constraints left China no choice but to invest in nickel processing in Indonesia, the same is not true of battery production. There are unconfirmed reports that CATL will soon build a battery plant in Indonesia. Regardless, the Widodo administration is considering a tax on the export of intermediate nickel products such as MHP that would force the decision for all countries.

To what extent have industries that are critical to U.S. national security been affected by Indonesia’s ban on nickel ore exports, and how could this affect the United States?

In the green energy transition, nickel is a critical mineral for U.S. energy security. Not only is it important for EV batteries to power transportation, but battery storage of intermittent solar and wind for electrical power generation is necessary for the transition of the electrical grid from natural gas and coal.

As noted, the United States has limited nickel resources as well as limited ability to refine nickel ore into intermediate products. Therefore, it is heavily reliant on other countries, not only for nickel ore but also for refined intermediate nickel products. The United States relies on Canada for over 40% of its nickel imports, while Australia, Norway, and Finland make up another 27%.

Indonesia’s decision did not have a direct or immediate impact on the production or importation of nickel in the United States. However, the projected increase in demand over the next decade for EV batteries and requisite nickel is a serious concern. The Biden administration’s 2021 supply chain report acknowledges the risk of a “large shortage of Class 1 nickel in the next 3–7 years.”

Under the export ban, China has partnered closely with Indonesia to secure a supply of refined nickel. This growing relationship gives China an advantage in leading the world in EV technology and production vis-à-vis the United States. In addition, the relationship and the lack of U.S. participation in Asian trade agreements places the United States at a disadvantage in achieving EV battery supply chain stability through one of the largest sources of nickel. Geopolitically, the partnership also more tightly connects the largest country in Southeast Asia to China.

How can the United States plug the holes in its policies in the region to address concerns created by the new law? Is U.S. EV battery policy likely to address China’s Southeast Asia strategy?

The Biden administration’s Inflation Reduction Act directly conflicts with Indonesia’s strategy. The legislation incorporated numerous climate change and EV policy initiatives, including two levels of incentives corresponding to EV batteries either manufactured in the U.S. or made with materials sourced from eligible trade partners. While Australia and Canada were identified as eligible sources of nickel, Indonesia was not included as one of the eligible trade partners. Clearly this provision undermines both steps in Indonesia’s two-step battery strategy with respect to the U.S. EV market. In addition, it raises questions about how the United States will decide which countries qualify for “friendshoring.”

Indonesia may join other Asian countries in publicly lobbying the Biden administration to reconsider these provisions. If no changes are made, the Inflation Reduction Act will likely cement Indonesia’s EV market ties with China and further undermine U.S. economic ties not only with Indonesia but with Southeast Asia more broadly.

This interview was conducted by Arsalan Ahmed while an intern with the Energy and Environment Affairs group at NBR.