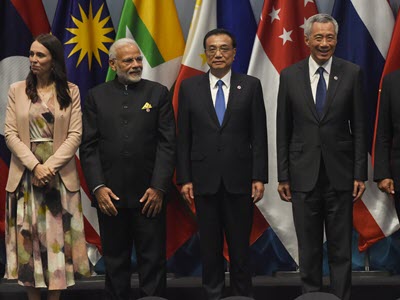 Saon Ray argues that India must better align its trade, industrial, technology, and even foreign policies to achieve its long-term goals. In a world with heightened competition among countries to access markets and resources, New Delhi needs to develop a more coherent approach to policymaking in these spheres.

Since the 1980s and early 1990s, India’s vision for itself in terms of growth and trade has undergone a significant change. Trade has long been critical to India’s growth, and its importance has only increased in the last two decades. Looking ahead, understanding the changes in trade policy that India envisages is crucial, due to both its past experiences and the changing world that the country now faces. The Indian approach to trade policy has seen two distinct changes since independence. First, up to the early 1990s, the approach was of export pessimism, born out of the colonial legacy and the unfavorable terms of trade that most developing countries faced due to their reliance on exporting primary commodities and agricultural products and importing manufactured goods. In the second phase, export pessimism gave way to greater openness and liberalization.

India dominated textiles trade in the eighteenth century. At the time of independence, the country was well integrated globally as it was part of a colonial economy. Total foreign trade as a ratio of national income had increased from 10% in the 1860s to 20% in 1914.[1] However, after independence, India followed a policy of import substitution and protectionism up to the early 1990s.[2] Increased customs duties and onerous processes accompanied the import of almost every good, especially capital goods. Liberalization began in the late 1980s and the early 1990s. The changes were largely in the external sector, industrial sector, banking sector, and capital markets. In the external sector, the changes were momentous in terms of reduction of tariffs, removal of quotas and other barriers to trade, exchange rate liberalization, and removal of capital account restrictions. The share of Indian exports in world trade rose from 0.5% in 1990 to 1.7% in 2018. In the industrial sector, licensing requirements were removed. Foreign equity holdings greater than 51% were allowed in most industries.[3]

Despite these moves toward liberalization, India was initially slow to enter into free trade agreements (FTAs). This trend began to change in the 2000s when India signed numerous trade deals with partner countries around the world. This engagement has continued to grow in recent years, including through agreements with Singapore, Malaysia, Japan, South Korea, and the Association of Southeast Asian Nations (ASEAN), as well as the South Asian Free Trade Area. Notably, most of these agreements are with East and Southeast Asian countries. The latest trade policy review of India by the World Trade Organization notes that while the basic tariff structure remains unchanged since 2015, with the adoption of the Goods and Services Tax (GST) in 2017, which replaced several taxes, additional duties and special duties previously added to the basic tariff have been removed.[4] This provision applies to both domestic and imported goods.

In recent years, these moves toward liberalization have generated concerns among policymakers about India’s trade policy. First, there is a perception that India’s FTAs have not delivered the intended results. Market access, even in the countries with which India has an FTA, has been limited, in part due to nontariff barriers and rules of origin.[5] Second, India has failed to increase its exports significantly and integrate into the regional value chains of East Asia. Third, the rising current account deficit and increasing imports from China have caused concerns. Finally, India’s decision not to join the Regional Comprehensive Economic Partnership (RCEP) raised questions about its trade policy stance.

Compounding these issues is the Covid-19 pandemic, which led to a slowdown in growth and other structural problems in the Indian economy. Growth slowed even before the pandemic, but supply chain bottlenecks due to lockdowns and dependence on certain countries like China for personal protective equipment and active pharmaceutical ingredients raised concerns about the resilience of value chains. In certain critical industries, the government felt that India depended too much on China. The pandemic has exacerbated the need for supply chain resilience and raised questions about the practice of lean and just-in-time management. It also has made many countries, including India, more protectionist, overturning decades of trade liberalization.

One of the concerns that India has had with respect to regional integration has been the lack of integration with “factory Asia.” While many countries in East Asia are deeply integrated into regional supply chains, India has had limited success.[6] There are two ways in which countries can engage in global value chains: backward or forward—that is, by importing or exporting inputs, respectively. India’s integration into global value chains is largely backward, or through intermediate imports that are used in Indian exports. However, it is not enough to enter value chains; upgrading domestic industries is also critical in order to remain competitive.[7]

To understand the role that global value chains can play in India’s trade policy, it is imperative to understand the difference between sectors and India’s competitiveness in each. Policymaking must account for sectoral differences as well as general differences affecting all sectors. India needs to correct many problems before it can reap the benefits of such engagement. Some of these problems are acknowledged by the government (e.g., logistics, inverted duty structure, and scale), but other issues are still not recognized (e.g., the interdependence between exports and imports, and hence the role of imports, particularly intermediate imports).

India’s vision toward the Indo-Pacific region has largely been driven by its Look East and, more recently, Act East policies. India adopted the Look East policy in the 1990s, which was replaced by the Act East policy in 2014.[8] The Act East policy extended economic initiatives to include political, strategic, and cultural dimensions of its relations to its neighborhood in the Indo-Pacific region. In a sense, this meant moving from purely economic to strategic concerns and upgrading overall ties with the region. However, linking trade policy with foreign policy has also been central to India’s approach. An earlier instance of this pattern occurred when India and the Soviet Union/Russia were engaged in rupee-ruble trade.[9] Foreign trade policy has guided India’s market access in a globalized world. Developed countries have used economic diplomacy synonymously with trade diplomacy, which is a policy approach from which India can also benefit.

In the Indo-Pacific region, India has trade deals with Bangladesh, Bhutan, Japan, Nepal, and ASEAN countries, and it has been in talks with both Australia and New Zealand. Other countries with which India will start negotiating a comprehensive agreement include the United Kingdom, while negotiations have been revived with the European Union and Australia (which were put on hold when the RCEP negotiations started). As noted above, it had an opportunity to join the partnership but chose not to. India’s main concern with respect to the RCEP was that it has not realized much improvement in market access in partner countries despite agreeing to tariff liberalization in other FTAs. Also, India’s gains from FTAs usually come from liberalization in the service industry, which was seen as limited in the RCEP. Concerns about opening up the agriculture sector also persist, as it is vulnerable to foreign competition and still employs about half of India’s working population.

Additionally, economic and strategic issues regarding China affected India’s decision not to join the RCEP. Concerns with China have escalated in recent years, especially due to the burgeoning bilateral trade deficit and ongoing border hostilities. When looking at this deficit, however, it is important to understand the economic factors behind imports from China and whether India can manufacture these products domestically. One of the problems that India faces in this regard is a lack of cost competitiveness. Due to this and other factors, India has been trying to export more to China without much success. The issue of competitiveness, however, is a domestic one given continuing structural problems (e.g., infrastructure, difficulty in acquiring land for industry, and slow turnaround at ports). In order to encourage exports and improve competitiveness, India recently introduced the Remission of Duties and Taxes and Exported Products (RoDTEP).[10]

The United States and China are India’s largest trading partners, with the former being the largest purchaser of Indian exports and the latter being the largest source of Indian imports.[11] However, India still does not have a trade agreement with either country, though it conducted a feasibility study of a bilateral agreement with China in 2007. During the Trump administration, limited talks occurred for a trade deal with the United States, but an agreement did not materialize. Notably, India’s vision of the east does not include the United States, which it views more as a Western country.[12]

India’s vision for 2030 was unveiled in the 2019–20 budget and contains ten areas of development, including trade-related aspects such as infrastructure development. The budget also reaffirms that India, despite not joining the RCEP, is still seeking to increase regional trade as well as to engage in new FTAs. There are some partnerships that could be promising (such as the Quad grouping with Australia, Japan, and the United States).

India was the fastest-growing major economy for many years and was expected to reach $5 trillion by 2024. Achieving these growth targets requires a significant contribution from exports. India’s vision for 2030 includes advancing its manufacturing sector and integrating its value chains. However, the challenges of the Covid-19 pandemic have revealed the importance of supply chain resiliency. In this respect, several countries, not just India, have questioned their reliance on certain critical elements of the value chain and imported products. Finding alternative low-cost intermediates will be an ongoing problem as India also tries to build up its manufacturing capability simultaneously.

The main idea behind global value chains is that of interlinkage or connections. This means recognizing the importance of imports, particularly imported intermediates, and rationalizing customs duties on such items. Also necessary is a recognition that policies need to be different depending on whether a country is integrated through backward or forward linkages.[13] Finally, it is critical to align India’s trade, industrial, technology, and even foreign policies to achieve these goals. In a world with heightened competition among countries to access markets and resources, India still lacks a coherent approach to policymaking in these spheres. What is needed now is a long-term view of trade and alignment of India’s trade policy with its foreign policy. Recent efforts notwithstanding, much more must be done to this end.

Saon Ray is Professor at the Indian Council for Research on International Economic Relations (ICRIER).

[4] The latest trade policy review for India is available at https://www.wto.org/english/tratop_e/tpr_e/s403_sum_e.pdf. The 10% social welfare charge, which applies only to imports, remains in place. Since 2015, India has introduced several reforms. These include the introduction of the GST to harmonize the indirect tax system, the Insolvency and Bankruptcy Code to address the problem of debt in the corporate sector, banking reforms to improve supervision of banks and nonbanking financial companies, and, most recently, legislation to improve marketing and reduce regulation of agricultural products. There have also been several measures to facilitate trade, including reduction in the number of documents required and the automation of the customs clearance system for imports and exports. Since 2015, measures have included the electronic interface, the Indian Customs Electronic Gateway (ICEGATE), the Single Window Interface for Facilitation of Trade (SWIFT), the new Authorized Economic Operators (AEO) program, the Direct Port Delivery and the Direct Port Entry facilities, and the increased use of the Risk Management System.

[5] Nontariff barriers faced by India in ASEAN include both sanitary and phytosanitary barriers and other types of technical barriers to trade.

[8] Ngaibiakching and Amba Pande, “India’s Act East Policy and ASEAN: Building a Regional Order through Partnership in the Indo-Pacific,” International Studies 57, no. 1 (2020): 67–78.