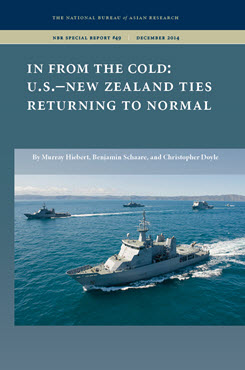 In from the Cold
U.S.-New Zealand Ties Returning to Normal

This NBR Special Report examines the dramatic thaw in U.S.–New Zealand relations in recent years and explores ways that the two countries can cooperate to boost security in the Asia-Pacific and strengthen trade and investment ties with other Pacific nations.

The docking of the HMNZS Canterbury at the U.S. naval base in Hawaii in June 2014 marked the near-complete normalization of relations between the U.S. and New Zealand. Strategic ties between these two erstwhile partners were severely strained in 1985 when New Zealand barred port visits by U.S. ships that could be carrying nuclear weapons. Relations began improving in the early 2000s when New Zealand sent special forces to support the U.S.-led war in Afghanistan in 2001 and a contingent of military engineers to support the U.S. mission in Iraq in 2003. Soon after the Obama administration announced its rebalance to Asia, then secretary of state Hillary Clinton visited New Zealand and called for “a new focus on practical cooperation in the Pacific region.” As the United States focuses more attention on the Asia-Pacific, New Zealand is emerging as a willing and able partner with many shared regional objectives.

This report from the Strategic Asia Program draws on research conducted for the NBR project “Strengthening the Asia-Pacific Order: The Future of U.S. Alliances and Partnerships.”