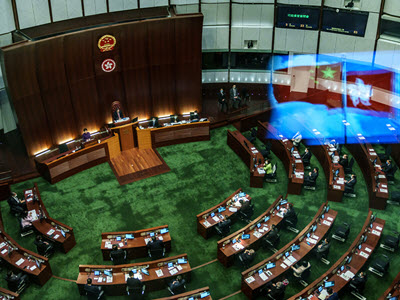 On December 19, 2021, Hong Kong held its first Legislative Council election following the Standing Committee of the National People’s Congress’s amendment of the city’s Basic Law in March 2021. In response to the electoral changes, which included only permitting “patriots” to run as candidates, pro-democracy politicians and their supporters boycotted the election. As a result, turnout declined to the lowest level ever, and all but one of 90 seats went to pro-Beijing candidates.

Kanghee Park interviewed Michael C. Davis from the Wilson Center to better understand the Legislative Council’s role under the amended electoral system and to examine the implications of the approach of the People’s Republic of China (PRC) to Hong Kong.

What are your observations about the 2021 Legislative Council election, which was the first held under the amended electoral system that Beijing introduced last year?

There have been multiple changes aimed at ensuring that only candidates whom the PRC labels “patriots” can serve in the Hong Kong Legislative Council. People who do not qualify as “patriots” are typically those who have a history of opposing the PRC and Hong Kong governments’ failure to carry out the political reforms promised in the Hong Kong Basic Law. In fact, a large portion of the pan-democratic opposition has been arrested and is being held in jail without bail, awaiting trial for charges under the new National Security Law. Under these dire conditions, the opposition political parties, which used to win the most votes in the limited direct elections for half the seats in the Legislative Council, chose not to participate in what they viewed as a rigged election.

The new electoral model Beijing directly introduced adds a long list of changes to eliminate opposition in the Legislative Council. These include increasing the number of legislators from 70 to 90 members but reducing the number of directly elected seats from 35 to 20; eliminating the seats traditionally held by the separately elected District Council; changing the constituencies for the so-called functional legislative seats to favor pro-Beijing organizations; shifting the membership of the Election Committee toward more representation of pro-Beijing organizations; and adding a power for the Election Committee to elect 40 of the Legislative Council members. The new system also adds requirements that all candidates for the Legislative Council be vetted and nominated by members of the Election Committee, as well as a separate Candidate Eligibility Review Committee, and be investigated by the special national security police unit. These changes are designed to ensure that the Hong Kong government faces no opposition in the Legislative Council, as was evident in the first election under the new rules in December 2021. The Hong Kong people expressed their disapproval by not showing up to vote in that election, with only a 30% turnout.

What is the origin of the Legislative Council’s structure and position in Hong Kong, and how do you expect its role to change now that voices of opposition are limited?

Under British colonial rule, there had been very little democracy in the makeup of the Legislative Council. For years the membership had been appointed by the Hong Kong governor. After signing the 1984 Sino-British Joint Declaration, the British became more concerned with democratic reform and began introducing elected functional and then directly elected geographic seats from the late 1980s. The directly elected geographic seats remained in the minority all the way up until the handover. In its defense, the British government could point out that the Chinese government had long objected to any attempt to introduce democracy. China worried that democratic reform might create a platform for the introduction of a path to self-determination and independence for Hong Kong.

All pretense of allowing genuine democracy was abandoned with the 2020 electoral reforms discussed above, though Chinese officials are fond of labeling this model as democratic. The mainland system has essentially been introduced in Hong Kong, with representation largely being controlled from the top down. One might expect this Legislative Council to function like the mainland National People’s Congress, with polite debate but no resistance.

What do you think is driving the PRC’s toughest measures toward Hong Kong, particularly the imposition of the National Security Law and institutional changes in Hong Kong since the 2019 protests?

It has long appeared that PRC officials are their own worst enemy when it comes to Hong Kong. Hong Kong never had a radical political culture. In the past, it was widely said that people mostly cared about business and quality of life, with little interest in politics. Whether that exaggerates the case is difficult to say, but clearly there was a degree of acceptance of colonial rule with rather limited politics. What was clear was a strong commitment to the rule of law and basic freedoms that prevailed in the latter years of colonial rule, as was borne out by many surveys in the pre-handover period.

Clearly, the text of the Joint Declaration and the Basic Law aimed to preserve the conditions for the rule of law and basic freedoms. But it was recognized that without the British constitutional tradition, as a foundation to preserve these commitments, there needed to be written guarantees backed up by the promised “high degree of autonomy” and effective local self-rule. Democracy would be essential to ensure that the local government fully represented local concerns in this regard.

Ultimately, this ran afoul of the PRC political tradition. While stringent control of conditions and policies on the ground may work on the mainland, it has not been conducive to running the open society prevailing in and promised to Hong Kong. As mainland efforts at control expanded, local resistance increased, creating the very conditions that both sides most dreaded. The Hong Kong people increasingly resisted the growing mainland interference, and mainland officials became more and more unhappy with that resistance, which they failed to understand. Such resistance reached its height in the 2019 protest over the proposed extradition bill, along with public opposition to the heavy-handed police crackdown on protestors and the failure of democratic reform. Unable to understand or even listen to local concerns, mainland officials launched the crackdown that ultimately led to the imposition of the National Security Law and the electoral changes.

Many people say that the “one country, two systems” principle no longer exists in Hong Kong today. What do you expect the future of Hong Kong to look like?

Recent policies have provided Beijing with the power, through a fully subservient local government, to control all critical local policies and to silence opposition voices that may resist. The Basic Law provided for a “high degree of autonomy,” with protection of the rule of law under the common law system, basic freedoms as reflected in international human rights treaties, and promises of democratic reform. These were the foundational elements of Hong Kong’s distinct system under the “one country, two systems” framework. All these elements have been undermined. Recognizing the risk of a dominant national authoritarian system overwhelming local autonomy, the Basic Law required that mainland laws not apply in Hong Kong, except for a limited few outside the scope of Hong Kong’s autonomy. It further provided that mainland departments under the central government should not interfere in Hong Kong affairs and that Hong Kong would on its own enact laws dealing with national security issues. These requirements have likewise been ignored.

The National Security Law intrudes deeply into areas of local autonomy. Mainland departments now operate openly in Hong Kong, with the most intrusive being the Office for Safeguarding National Security set up under the new law. The autonomy that remains looks very much like the model applied on the mainland to ethnic regions such as Tibet and Xinjiang, where national security concerns have overwhelmed the local system and increased the central government’s intrusion into local affairs. For these regions, “autonomy” means more direct central government control, not less. Some worry Hong Kong may come to look more and more like mainland cities, but that may understate the case. Most mainland cities do not house a resistant local population. Hong Kong people may increasingly feel unwelcome in their home city.

Have the United States’ and international community’s responses to these issues in Hong Kong been effective? What other international actions could be taken?

There are limits to what the United States and other foreign governments can do. While they can appeal to the Chinese government to return to its promised path in Hong Kong, they cannot force it to do so. In fact, outside pressure often results in Beijing doubling down on failed policies.

Despite these limitations, foreign leaders have adopted several policies aimed to call out Beijing for violating its commitments to Hong Kong. With the abandonment of Hong Kong’s promised local autonomy, the basis for its special recognition as a distinct territorial entity by foreign governments evaporated. Accordingly, nearly a dozen governments withdrew that recognition, including the United States, and now treat Hong Kong like the rest of China when it comes to trade and other exchanges. An exception is made for immigration. The United States has also instituted sanctions on individual officials involved in orchestrating the objectionable policies noted above. However, such sanctions have had little impact and may even be counterproductive, as they can be used to justify tit-for-tat retaliations and accusations of foreign interference.

If pressure is to have any chance at convincing Beijing to adhere to the promises to Hong Kong, it would need to be backed up by more systematic application and, where needed, enactment of human rights laws that apply to trade, finance, and other exchanges. Sanctions alone, as a concept, may serve the purpose of highlighting objections but have little impact on actions by the Beijing and Hong Kong governments. Economic pressures against human rights violations, consistent with core U.S. values, may have a larger impact by imposing costs for both U.S. and foreign companies that violate these requirements. Though this systematic enforcement approach may take more time, it could be more effective in the long run.

In the short term, the most important issues for the United States and other foreign governments to address relate to immigration access. The United Kingdom, in this regard, has correctly offered a path to residency and ultimate citizenship for Hong Kong residents born before July 1, 1997 (the so-called British National Overseas passport holders) and their dependents, estimated to total well over three million people. The U.S. Congress has considered legislation under such headings as safe harbor and freedom of choice (some of which is now included in the America Competes Act of 2022) that would open up immigration access for protesters and Hong Kongers at risk.

I encourage passage of such legislation. I further suggest that steps be taken to provide easier access for young Hong Kong students to gain admission to universities in the United States and then, upon graduation, be afforded a path to citizenship. The admission of such talented young people would benefit the United States and assist Hong Kong’s young people who have resisted these repressive policies.

Michael C. Davis is a Global Fellow at the Wilson Center, a Senior Research Associate at the Weatherhead East Asia Institute of Columbia University, and a Professor of Law and International Affairs at O.P. Jindal Global University. He was a professor of law at the University of Hong Kong until late 2016. He is the author of Making Hong Kong China: The Rollback of Human Rights and the Rule of Law (2020).

This interview was conducted by Kanghee Park, a Korea Foundation Research Fellow with the Political and Security Affairs group at NBR.