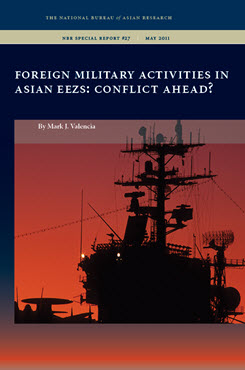 This essay describes the maritime geostrategic context and changing security paradigm in Asia, delineating where, how, and why the maritime perceptions, strategies, and policies of key Asian actors clash with those of their neighbors and the U.S.

The political and legal defense of U.S. military activities in foreign exclusive economic zones (EEZ), such as China’s, is not guaranteed to succeed. Law and practice in this regard are evolving. Unless some understanding and accommodation are reached regarding various “red lines,” serious international incidents are likely to increase in frequency and intensity. Possible ways forward, which are not mutually exclusive, include managing the evolution of the status quo, U.S.-China bilateral agreements, international arbitration, and a regional agreement, perhaps led by ASEAN.