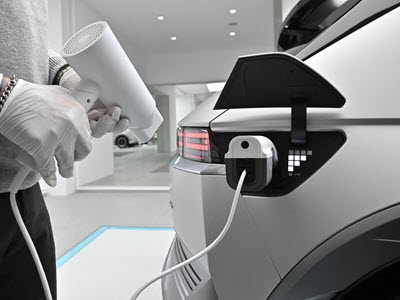 Driving Down Emissions
The Role of Technology Transfers in Decarbonizing Transportation

Both the United States and South Korea have committed to reaching net-zero emissions by 2050, along with helping other Indo-Pacific nations to decarbonize. As two advanced economies and long-time partners, there are many opportunities for the two countries to collaborate on breakthrough technologies in pursuit of carbon neutrality.

Technology transfer is an important component of innovation, both globally and locally, and will play a critical role in accelerating the global transition to a carbon-free economy. However, there are important distinctions regarding technology transfers that occur within a geographic or cultural region and those that occur from country to country or continent to continent. Further, the nuances around knowledge transfer depend on the type of knowledge being exchanged and the environment in which the technology will be deployed or implemented. In the context of decarbonizing the global economy, the tools at our disposal range from technology in its purest sense (such as breakthroughs in solid-state batteries) to business model innovations (such as battery swapping or innovative financing solutions).

When considering decarbonizing transportation, it appears that pure technology may be easier to transfer than business models from one country to another. As countries around the world consider their roles in supporting a global transition to a carbon-free economy, it is important to distinguish between universal and country-specific considerations. In simpler terms, a technology that thrives in the United States or South Korea will not necessarily have the same success in India or Indonesia.

Whether a new technology is deployed in the United States, Asia, or anywhere around the world, the rate and extent of adoption will to some degree depend on the ability to change consumer behavior. In the case of decarbonizing transportation, there are a few considerations: some forms of transportation rely primarily on adopting a new type of technology (electrification), while others rely on purely behavior changes (increasing nonmotorized transit or bus ridership). Nevertheless, when it comes to adopting new technology or changing mobility behavior, there are three universal trends that need to be true regardless of location:

Once new technology can meet these minimum requirements, we must then consider the methods available to accelerate adoption—namely, supportive policy and innovative business models. Policy in the form of subsidies and incentives can accelerate the cost-parity requirement, and new business models can address the convenience and performance requirements of new technologies. Business models can also help overcome the challenges that arise from higher upfront capital costs. The success of new technology and business models is intimately tied to how people and cultures engage with mobility. Specifically, people’s relationship with transportation and mobility is partially dependent on a few factors, including the following:

To be successful in transferring a lower-carbon mobility solution from one country to another, it is important to consider these relationships between people and mobility. The following section provides a few examples of how this consideration comes into play.

Battery swapping for cars was attempted in Israel in 2011. The practice initially achieved limited success but eventually failed (some may say catastrophically) and then was largely written off as a nonviable business model. A decade later, however, battery swapping for two-wheelers is thriving in Taiwan and is currently expanding into China, India, and Indonesia. The success of battery swapping is tied to the level of convenience it provides over the alternative as well as the environment and cultural behavior where it is deployed. In highly dense urban environments where access to curbside charging is rare or impractical and the majority of vehicles are two-wheelers, battery swapping becomes a more convenient and practical option. However, in the United States, where population density is much lower, cars are nearly universal, and access to home or public charging is more feasible, the battery swapping is costly and may face more barriers to adoption.

Another example involves autonomous vehicle (AV) technology. To some degree, the AV technology developed in one country can be transferred to other countries, but not necessarily with the same level of performance or safety. This has to do with both the environment in which vehicles operate, such as weather, physical street dimensions and conditions, and signage, and cultural or behavioral considerations, such as vehicle traffic patterns, pedestrian behavior, and the degree to which traffic rules are obeyed or enforced.

AV technology that can operate with required levels of safety and performance in the United States may not achieve the same levels in other countries. It is not surprising that Waymo, an AV ride-hailing service, has chosen Phoenix, with its wide roads, minimal pedestrian traffic, and practically nonexistent inclement weather, for beta testing. Operating AVs in India or highly dense cities in Southeast Asia will present challenges. Those challenges do not arise from the technology itself but from the environment. In the case of India, the streets are more congested with pedestrians and a wide variety of vehicle types, traffic laws are enforced less, monsoons are regular, and labor costs are lower. Thus, the relative economics of AVs are diminished. However, even when AV technology matures in the United States, it is not clear that people will give up their propensity for personal vehicle ownership and adopt a paradigm of shared electric mobility. Some habits, such as owning a vehicle and not sharing a ride with others, will be hard to break.

In South Korea, the city of Seoul shows that such behavioral shifts are possible but require significant government support and buy-in from the public. Seoul introduced integrated multimodal public transportation, with free transfers between the city’s metro system and its bus rapid transit system to encourage public transportation over private vehicles. This success was built off technology to track fares based on distance traveled, and which allowed updated monitoring for passengers. Seoul also began the Walkable City, Seoul project in 2016, which expanded pedestrian access throughout the city and implemented a public bike-sharing application. As a result, according to the government of Seoul, over 60% of the city’s travelers used public transportation in 2020. Improving the ease of use for commuters is an example of how technology can be applied to change human behavior around transportation, but this was made possible by the existence of the political will and transit infrastructure already in place in Seoul.

Striking a balance between long-term investments through technology and immediate carbon-reducing options through public transportation will be necessary to decrease carbon emissions for high-density metropolitan areas. These examples demonstrate the importance of understanding which technologies are technically transferable but may not be practically or culturally transferable. Decarbonizing the entire transportation sector globally requires more than just a techno-economic solution; it requires systemic behavioral change and adoption of new technology.

Technology itself offers a path to address cost, convenience, and performance. Advanced battery technology is one area where breakthrough technologies will have impacts that propagate globally and rapidly. New cell chemistries that offer significantly increased energy density can unlock electrification of new segments (e.g., air, long-haul freight, and shipping). Improvements in cycle life will continue to open up new opportunities for vehicles to provide grid services without concerns for battery degradation and will have other implications for second-use batteries. Additionally, scale and volume will continue to lower cost and performance barriers. Ultimately, however, decarbonizing the transportation sector will require a comprehensive approach and rely on yet-to-be determined technologies and business models.

Garrett Fitzgerald leads work on the beneficial electrification of transportation and buildings at the Smart Electric Power Alliance (SEPA). Prior to joining SEPA in 2021, he spent eight years working at the Rocky Mountain Institute (RMI), leading RMI’s electricity program to accelerate the integration of electric vehicles and clean energy in India. Dr. Fitzgerald holds a BS in mechanical engineering from Santa Clara University and an MS and PhD in earth and environmental engineering from Columbia University.