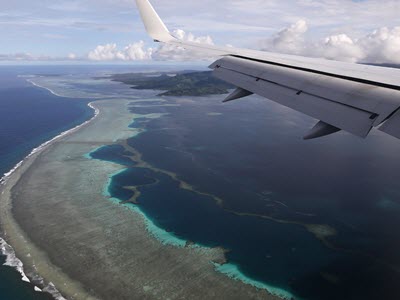 Developing a Comprehensive U.S. Policy for the Pacific Islands

In recent years, the Pacific Islands region has emerged as an increasingly contested area in the U.S.-China competition for global influence. In light of this, Rachel Bernstein interviewed former ambassador C. Steven McGann to trace the relationship between the United States and the Pacific Islands and assess the policy priorities for both the United States and these countries.

What are the key areas of U.S. policy toward the Pacific Island Countries (PICs)?

It has taken the United States quite some time to understand not only that it needs to have a policy toward the PICs that fundamentally lays out what the U.S. objectives are, but also how to devise a long-term sustainable relationship and policy in the region that is based on continuity. There are several crucial aspects that the United States must pull together in order to form this policy.

First, the United States must acknowledge China’s role in the Pacific. The United States’ adversarial relationship with China in the region has moved beyond just the competition for diplomatic recognition of Taiwan by regional states and now includes U.S. concerns about Chinese expansion in the South China Sea and how China could manipulate its relationships in the South Pacific in a way that is counter to U.S. objectives.

Second, the United States must link its policies in the North and South Pacific. Right now, the United States has a very clear understanding of what it is doing in the North Pacific with the Freely Associated States and the American territories of Guam and the Northern Mariana Islands. The United States must understand what its priorities in the South Pacific are, and how they can be achieved. Specifically, Washington needs to examine how it will refocus its engagement with Tonga, Fiji, and most importantly the Melanesian countries of Papua New Guinea, Vanuatu, and the Solomon Islands and expand its understanding of the PICs to include Timor-Leste.

Third, the United States must understand how new resources directed toward the Pacific are consistent with its foreign policy; ensure that they are complementary to the resources that key U.S. partners, Australia and New Zealand, are providing to the region; and meet the development needs of the country in which they are going to be housed.

These three aspects of a Pacific policy can be pulled together when establishing new platforms or joint military facilities in the region. The current National Defense Authorization Act includes major funding for the Pacific Defense Initiative. This new funding has to be applied in a way that complements U.S. desires for new platforms in the North and South Pacific due to increasing competition with China. There is discussion of Manus Island in Papua New Guinea hosting a joint military facility between Papua New Guinea, Australia, and the United States. The people of Papua New Guinea have made it very clear that they welcome engagement with the United States and the establishment of this facility but are also concerned with the economic viability of this relationship. Washington has to ensure that it is giving countries sufficient resources to meet their development needs and priorities.

What are the PICs seeking in their relationships with the United States?

In my experience, the PICs are looking for sustainability and continuity in their relationships with the United States. Prior to 2007, there was a sense that the United States had abandoned these countries, so they are now looking for a strong signal of support. Washington must be mindful that the PICs were disappointed by its response during climate change negotiations when it became clear the United States was not inclined to compensate them for the negative impacts of climate change, particularly sea-level rise. As a result, it needs to work to regain and rebuild the trust of these countries.

I think the way for the United States to demonstrate continuity and stability is to examine how it can engage through multilateral institutions that have been established in the Pacific by Pacific Islanders. For example, the United States does not focus enough on the Secretariat of the Pacific Community (SPC), a development agency in which it is a charter member and where four Americans have served as director-general. The United States currently provides 17%–18% of the SPC’s annual budget and should look for ways that it can increase its contribution to and engagement with the agency. The SPC is important because both the PICs and the U.S. territories are members. This serves as an opportunity to harmonize U.S. support not only with the Freely Associated States but also with the other Pacific Islands, resulting in greater regional influence. The United States also needs to look closely at the role of the Melanesian Spearhead Group and areas for increased engagement with it. China was the first to engage with the group, and the United States should also seek to expand its relationship.

If the United States is going to emphasize multilateral organizations in the region, it is important that there be a coordinating mechanism in place for the State Department. The United States should create a special envoy to the Pacific who coordinates with Indo-Pacific Command and other U.S. agencies to facilitate a much larger and overarching role with the PICs. The new special envoy would employ multilateral organizations as a framework to provide assistance and listen to the priorities and needs of regional countries. In addition, the envoy would help facilitate Taipei’s contributions to regional economic development and humanitarian assistance to the PICs.

How does the increasing threat of climate change affect regional stability and U.S. policy toward the PICs?

The United States must recognize that it will have to play a more forceful role when it comes to responding to the negative impacts of climate change and that its response cannot be limited to humanitarian assistance and disaster relief in times of need. The impacts of climate change are not restricted to intensifying weather patterns and rising sea levels. For example, as a result of climate change, the PICs are facing food insecurity. Many islands have to import food, which in some countries has led to poor dietary choices and a rise in diabetes and other noncommunicable diseases. Other islands have experienced a rise in human trafficking—not so much in the movement of labor but through the increasing exploitation of vulnerable populations, particularly women.

As part of a comprehensive approach to the region, the United States will need to employ assistance from the United States Agency for International Development (USAID) as well as from law enforcement and other sectors. For example, in the case of Kiribati and Fiji, Kiribati purchased land on Vanua Levu, Fiji, in response to models that show that in 75 years Tarawa will not be sustainable because of rising sea levels and immutable damage to its fresh water table. The United States will need to work with both Fiji and Kiribati to facilitate this transfer. Regarding the exploitation of women, the United States has to acknowledge the significant role that women play in the PICs. In some countries, resources are passed down matrilineally; in others, women play a large role in the public sector. The United States needs to focus on the implementation of women, peace, and security programs in the Pacific. These are just a few examples of what the United States will have to consider in order to ensure an effective and comprehensive approach to counter the negative impacts of climate change.

The PICs each have their own histories and relationships with great powers. How do their differing postcolonial legacies affect U.S. policy toward the region?

In the past, the United States has at times acknowledged post–World War II legacies in a way that has been detrimental to its own policy goals. For example, the United States has not sufficiently provided assistance beyond a strong response to HIV prevention in Melanesia, and it looks to Australia to principally support Papua New Guinea. The same could be said for the Solomon Islands and, to a lesser extent, Vanuatu. The key U.S. allies in the region have adopted different approaches to the PICs. Australia, New Zealand, and Japan have continued to place a higher priority on development assistance and capacity building. I think this is because the United States did not have a comprehensive formal policy for engagement. While decisions toward the PICs were often in line with U.S. interests, they sometimes were not.

The U.S.-Australia bilateral relationship is a central part of implementing U.S. policies in the Pacific Islands region. Successive Australia-U.S. Ministerial Consultations communiques have borne this out, particularly as the two allies increasingly coordinate their approaches in the South China Sea. New Zealand also has strong relations with the PICs, and the United States has been able to use New Zealand’s engagement with the island countries to enhance the U.S.–New Zealand relationship. In turn, this strengthened bilateral relationship has helped invigorate U.S. relations with the Pacific Islands.

Has U.S. policy toward the PICs changed in recent years as a result of increased competition with China in the Pacific?

Yes, U.S. policy toward the PICs has changed as a result of increased competition with China. First, the United States has had to adjust its policy due to the negative ramifications of competition for diplomatic recognition with Taiwan. Beijing used the diplomatic competition to burden the PICs with loans they were unable to fulfill, particularly for construction projects, whereas Taipei often chose direct payments, including cash and humanitarian assistance channeled through local politicians. Tonga is a good example of this debt-burdening. Second, the United States has had to shift its policy as it comes to understand that China’s assertive policies in the South China Sea mirror a disruptive role in the Pacific not only militarily but also with regard to U.S. diplomatic engagement with the PICs. China has dramatically increased its bilateral and economic presence in the region as well as made concerted attempts to influence multilateral institutions. The United States must focus on meeting this new level of competition.

The best way to address this new competition with China is to employ a resource-based policy that references the United States’ long relationship with the Pacific and acknowledges the fact that the United States is a Pacific country. This policy would include building new platforms in the Pacific; providing resources to assist the PICs with the priorities of long-term economic development, climate change, and the protection of vulnerable populations; and emphasizing U.S. outreach as both a partner and a donor country to multilateral organizations that currently exist in the Pacific.

C. Steven McGann is Founder of the Stevenson Group, an international consultant, and a global security strategist. He served as U.S. Ambassador to the Republics of Fiji, Nauru, and Kiribati, the Kingdom of Tonga, and Tuvalu from 2008 to 2011.

This interview was conducted by Rachel Bernstein, a project associate with the Political and Security Affairs group at NBR.