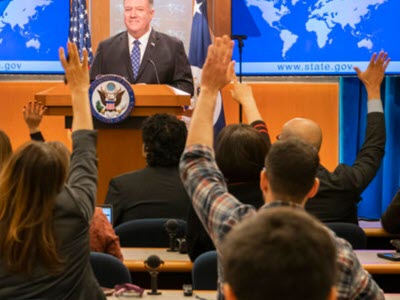 Benjamin Shobert argues that the United States is better positioned to show global leadership than China, because the American political system is better suited for political change. This commentary was originally published by the Quincy Institute for Responsible Statecraft and is reprinted with permission.

As the reality of the Trump administration set in, policy makers begrudgingly started to acknowledge that much of what had made globalization sustainable in general, and the U.S.-China relationship specifically, needed to be fundamentally reworked. Parts of this should have required a long overdue revisiting of the social contract in developed economies to ensure more resiliency in the face of massive structural changes to the world’s economy, and parts would have required reforms to how global multilateral institutions worked, to capture the realities of China’s ongoing nationalist economic policies, and the emergence of high technology sectors whose demands were poorly matched to trade policies written decades ago.

But these reforms stood little chance at a moment in time where discarding, versus reforming, much that had proven to build a largely peaceful and prosperous world over the last 30 years had become Washington’s rhetorical currency. The Trump administration’s moves towards de-coupling with China would have been troubling enough in the midst of the economic and political realities always at play in an uncertain world, but with the emergence of a global pandemic that began in China and has now spread across the globe, we have the perfect cocktail for something that could get truly out of hand: feckless political leaders in both the U.S. and China, deliberate seeding of fake news by nationalistic media sources, and now threats of recrimination.

Last week, Sen. Tom Cotton said of the U.S. response to COVID-19 that, “we will hold accountable those who inflicted it on the world.”  What Sen. Cotton inferred, the administration this week made explicit when President Trump referred to COVID-19 as “the Chinese virus” and Secretary of State Mike Pompeo called it “the Wuhan virus.”

The emerging conspiracy that COVID-19 was designed in a Chinese lab and released to the public—whether by accident or design—would not be the first such conspiracy to be latched onto by this administration. This conspiracy could have much more serious implications, the sort of which make near-peer conflict on the heels of a collapse in economic activity and political crisis a non-trivial possibility.

And on Tuesday, in a moment of historically bad timing and judgment (the sort of intemperance that should remind us all that China is absolutely not ready to lead, and that the very best of American leadership is desperately called for now more than ever), the Chinese government expelled journalists from the New York Times, Wall Street Journal, and Washington Post. It would be a tragic failure of imagination to not conceive of how this could spin out of control.

Some would have us mark the president’s reference to COVID-19 as a “Chinese” virus an accidental slip of the tongue (or thumb, as Twitter enabled diplomacy now works), or to others yet another eye-rolling example of political correctness gone amuck.

But in the midst of a global pandemic and economic crisis, when every phrase must be chosen with deliberation and intention, where leaders’ words can speak to strike fear or calm anxieties, to direct blame or encourage caution, it was an unnecessary provocation, and in that becomes yet another strike against reasonable hope of multilateral collaboration at this time of great need.

The COVID-19 pandemic has laid bare problems that are not going to go away once the virus has receded, problems that no single nation can solve on its own. The great tragedy may not only be the lives lost and economies damaged as a result of this crisis, but also the further acceleration of a spectacularly dysfunctional de-coupling in the U.S.-China relationship, and the ongoing destruction of global public health, trade, and other institutional capacity precisely when it is most sorely needed.

Multilateralism exists to ensure that at times of great crisis such as the one we are now in, countries can work together at global scale. While multilateralism may be a fiction for some, it is the very best kind, the sort that calls us to our most noble ideals largely because its authors can imagine a world where countries beset by their own mounting problems are prone to bad decisions whose repercussions have no respect for borders.

Leaders in these moments can obfuscate, which is exactly what the Chinese—who had good reason not to trust its emerging problem with American policy makers given the events of the last three years—chose to do. Or, leaders can pursue cheap answers to very expensive questions—which today would be a lit match in a world flush with kindling. Multilateralism provides the connective tissue that knits countries together precisely when they are most likely to go their own way.

Is China to blame for the COVID-19 crisis? Without doubt, the Chinese Communist Party’s (CCP) political ideology and its disgraceful stifling of front line physicians who knew something was wrong and were prevented from notifying the appropriate authorities of the emerging crisis, made the spread of the disease in early days much worse than it had to be. There is every reason to blame China for this part of the problem, and to use it as evidence in discussions with Chinese leadership of the problems in their political model, and the concerns these blind spots raise with their global partners.

But for that to occur, China would have to believe that the U.S. has China’s best interests in mind, and that we have technocrats capable of imagining a world where an emerging China can co-exist with the United States. Perhaps more critically, as casting blame goes, American responses to COVID-19 have thus far not been bright and shining examples of the right sort of American exceptionalism. We are all in this together, or we are all on our own. Few crises like those unique to global public health make this abundantly clear.

The last several years have given rise to a more bellicose China, one comfortable with asserting that it should be seen as a global leader, and throwing the occasional elbow to make its point.  China’s actions in the early days of the COVID-19 outbreak do not support its desire to be seen as such a leader, and the United States government should be specific in articulating to China why. Specifically, for China to play such a global role, it must understand how its domestic politics—in particular its inexcusable stifling of dissenting voices—make the country’s leadership impossible to be trusted at the very global stage China so badly wants to be seen as a leader of. But this standard also hold to the United States: while our system has not suffocated our canaries in the public health mine, it has eviscerated trust through repeated dishonesties. Unlike China, where reforms of its political system are difficult and largely outside the control of average citizens, the U.S. is capable of deep structural reform.  We have done it before, and we must do it again now.

The American opportunity to rise above this moment and provide an answer to these challenges is much clearer than China’s opportunity to do the same, in large part because the American political system has the best-established mechanism in place for political change. In November, assuming elections are held (an unknown which should make anyone who has ever had suspicions about the current president’s authoritarian impulses shudder), Americans will have a choice not just between parties, but between policies and competencies. This choice will come on the heels of a stark reminder that certain historical crises are why competent government and well administered multilateralism are the best bulwark against panic, conflict, and war. We must choose wisely.

Benjamin Shobert is Senior Associate for International Health at NBR. He advises and contributes to NBR research programs on international health in Asia.

This commentary was originally published by the Quincy Institute for Responsible Statecraft on March 18, 2020.