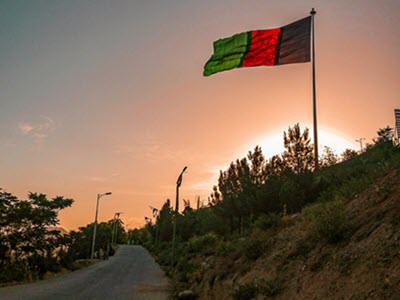 Afghanistan: A Junction of Asia’s Connectivity

Zobair Salahi argues that Afghanistan, as the “heart of Asia,” affects security interests of neighboring countries and can change the course of global politics. A stable and peaceful Afghanistan could be an integral actor in trade, transit, and political stability across the Eurasian continent, but continued unrest will undermine regional peace and stability.

Historically, Afghanistan has been an important crossroads, connecting many civilizations in ancient times. Even today, the country is at the center of Asia’s connectivity, geopolitically located at the intersection between Central Asia, South Asia, and the Middle East. Known as the “heart of Asia” and sharing cultural practices and traditions with these regions, the country can play an essential role in regional and global politics, especially with concerns about a new “great game” narrative and the growing alignment between China and Russia.

Afghanistan has always been in an influential but volatile geopolitical location, connecting Central Asia, South Asia, and the Middle East. In ancient times, the country was at the crossroads of many civilizations as a junction on the Silk Road, linking the East to the West and Central Asia to the Arabian Sea and the Indian Ocean. More recently, Afghanistan has been directly or indirectly involved in global power politics ever since its establishment as a sovereign government. In the Great Game of the nineteenth and early twentieth centuries, it acted as a “buffer state,” a neutral ground in the rivalry between the Russian and British empires. During the Cold War, it played a pivotal role in the downfall of the Soviet Union.

In the post–Cold War era, Afghanistan has provided a haven for Islamic fundamentalism and extremism, adversely affecting international peace and order. Following the September 11 attacks, the country became a battleground for proxy wars between different regional and global states. With the emergence of a new great game, Afghanistan is once again a powerful political influence, being at the intersection of the nuclear states of Asia and surrounded by three regional security complexes. Although public attention on the country may have waned due to the U.S. withdrawal, the fall of the republic regime, and the Russian invasion of Ukraine, Afghanistan remains more important than ever in global politics. Stability and peace in the country would be significant for intraregional trade and economic prosperity, whereas continuing instability would disturb the world order as well as the geopolitics of regional countries, primarily Pakistan, Iran, China, and Russia.

Given this pivotal location, a stable and peaceful Afghanistan could play a vital role in global and regional economic cooperation. Central Asian countries have vast reserves of oil and gas that are crucial in fueling the global economy. Afghanistan could be an alternative route for transporting oil and natural gas from Central Asia amid massive sanctions on Iran and Russia—for example, through the Turkmenistan-Afghanistan-Pakistan-India Pipeline. Other opportunities in the energy sector include the Central Asia–South Asia power project and the Turkmenistan-Uzbekistan-Tajikistan-Afghanistan-Pakistan electricity transmission line. In the transportation sector, Afghanistan stands to be a crucial link in the proposed Five Nations Railway corridor (which aims to connect China to Iran via Afghanistan, Tajikistan, and Kyrgyzstan).

Furthermore, the Heart of Asia–Istanbul Process promotes regional security, economic, and political cooperation centered on Afghanistan. Through dialogues and a set of confidence-building measures, the initiative brings together fourteen countries, including immediate and extended neighbors of Afghanistan. In addition, China is increasingly likely to seek a role for Afghanistan in its Belt and Road Initiative following the withdrawal of the United States and the subsequent vacuum that was created.[1] China has already shown interest in including Afghanistan in the China-Pakistan Economic Corridor.[2]

Nevertheless, facilitating these opportunities primarily depends on whether the Taliban regime is recognized as a sovereign government. The U.S. withdrawal from Afghanistan has paved the way for Chinese influence in the country and a Pakistan-controlled Taliban regime. Now that Russia and China are more at ease with the absence of the United States, they can take advantage of post-NATO Afghanistan, working to curtail U.S. influence in the region and secure their regional and global interests.[3] Russia and China will try their best to keep Afghanistan under their direct influence and help the Taliban establish a successful government. The visit in March of the foreign minister of China and the special envoy of Russia to Kabul illustrates both countries’ eagerness to support the Taliban regime, even though they do not yet officially recognize it.[4] China is already planning to expand its investments in Afghanistan to access the country’s vast and rich mineral and natural resources, including increasingly important supplies of lithium.

The Taliban government may not last long, however, given that it is an ethnically homogenous regime that lacks governance experience, has significant shortages of skilled professionals, and possesses a fundamentalist ideology. Sustaining an effective government amid a growing humanitarian crisis will be challenging. Indeed, a mobilization of resistance against the Taliban in northern Afghanistan has already begun.[5] These circumstances may increase the possibility of a new civil war within the country and could even lead to the partition of Afghanistan, with significant implications for the geopolitics of the Eurasian continent. Any unrest in Afghanistan could spill over into other countries in the region.

Fear of an unstable Afghanistan was one of the main reasons behind creating the Shanghai Cooperation Organization in the early 2000s. A prolonged civil war would affect China’s vision for expanding its sphere of influence in the region and delay Russia’s and China’s policies to challenge the current political and military world order. These policies are focused on eroding the United States’ transatlantic influence and accelerating the West’s decline as an effective global actor by creating a new multipolar world order based on Eurasianism rather than Atlanticism and making the world a safer place for authoritarian governments. Iran and Pakistan will also try to prevent Afghanistan from descending into a civil war because of the potential impact on the Baluchistan insurgency and separatists in both countries.

Needless to say, the current situation is precarious. Given that the failure of Afghanistan is not advantageous to its neighbors, there is a growing possibility that some of these countries will recognize the Taliban government. The neighboring countries need stability in Afghanistan. Recognizing the Taliban and negotiating bilateral agreements will create new partnerships and prevent potential threats from coming across Afghanistan’s borders.

While Afghanistan is indeed the “heart of Asia,” it is a heart whose volatile beat affects security interests of neighboring countries and can change the course of global politics. A stable and peaceful Afghanistan could be an integral actor in trade, transit, and political stability across the Eurasian continent. On the other hand, continued unrest will undermine regional peace and stability. If the situation worsens enough, China, Russia, Iran, and Pakistan could intervene to advance their own regional and political interests, with global repercussions.

Zobair Salahi is an Afghan researcher and an expert in defense and strategic studies currently based in Seattle. His research focuses on South Asia, Central Asia, and the Middle East.